Did someone tell you your suit looks tacky? It might be time to buy a new one. This post unpacks the meaning and origin of this expression.

The expression ‘tacky‘ means a person with vulgar manners or poor posture and behavior around others. It also refers to a lack of style or something looking ‘shabby‘ and disheveled or neglected. You can use tacky to describe anything that loses its original condition over time, such as unkempt real estate.

‘Tacky‘ can refer to fashion that’s ‘tawdry,’ such as a dress jacket, shows, or any clothing item that looks ‘tatty’ or shabby. If a person doesn’t know how to behave around others, you could describe him as tacky. It refers to something beneath you or ‘lower-class.’

In Louisiana, ‘tacky‘ has an alternate meaning. It refers to an inferior breed of Creole ponies called ‘tackies.’

“The use of that word is just tacky. It ruins the sentence and the flow of the paragraph. Can’t you change it to something else?”

“That dress looks tacky. I know you like it, but it looks like something you picked up at a thrift store downtown. You’re not coming out with me looking like that.”

“That house looks tacky. The purple paint on the walls is peeling, the yard is overgrown, and the roof looks like it needs attention.”

“Your shoes are tacky. They look like they’ve seen better days. Maybe it’s time to invest in a new pair of sneakers.”

“The whole event experience was tacky. From the moment you arrive, it’s clear the event organizer didn’t put any effort into it.”

“This presentation is tacky. It looks like you put it together in ten minutes. If you want to pass this course, you must try harder.” 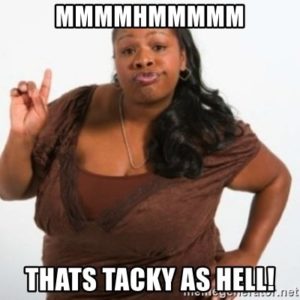 The expression ‘tacky’ originates from the late 1800s. The term was first used in 1888, referencing ‘in poor taste.’ The early definitions and synonyms of the word are ‘shabby’ or ‘seedy,’ which we already in use by 1862.

The earliest definition of the adjective use of ‘tacky’ is an ‘ill-fed or neglected horse.’ The term changed its meaning to the current definition by the late 1800s and was popular Southern colloquialism. The wealthy plantation and slave owners of the time would use ‘tacky’ to describe ‘tainted’ people who were not part of the elitist family tree.

Those wealthy individuals with no heritage extending back to their great grandfather were ‘tackies.’ Typically, people would use the term with contempt for others. However, this use of the word died out alongside the wealthy families that used to reside in the Southern states.

Phrases Opposite to Tacky

The phrase ‘tacky’ doesn’t apply to the action of ‘tacking’ or moving in a zig-zag pattern to catch the wind in a sailboat. It refers to something out of style or a person’s behavior.

You can use ‘tacky’ in social and professional conversations and text messages. Use it at work to describe how a salesperson’s handling of a client was tacky.

Use it at home to describe the neighbor’s property. If something is tacky, it’s out of style but not retro. It’s a way of saying the person has no sense of style or taste. You can use ‘tacky’ to describe objects, fashion, people’s attitudes, and more.

While it’s more common for people to use tacky to describe someone’s lack of style, it can also describe something lightly sticky. For instance, if you paint a wall with primer, you would wait for it to become ‘tacky’ before adding a second coat.