Are you losing a fight? Maybe it’s time to ‘throw in the towel’ before you get hurt. This post unpacks the meaning and origin of this expression.

The expression ‘throw in the towel’ means you’re giving up on a task or action. Typically, you’ll give up due to exhaustion or failing to see the results you expect.

If you ‘throw in the towel,’ it means that you feel there is no possibility of winning or achieving the desired outcome. The phrase means you quit in the face of adversity before it does you harm.

“It looks like the boxer’s corner will throw in the towel. He’s taken a beating for the last five rounds, and they need to stop before he gets hurt.”

“I’m throwing in the towel on today. I’ve had enough, and I’m going home. Call me tomorrow and let me know how it goes.”

“I’m throwing in the towel with trying to teach an old dog new tricks. He won’t listen to anything I say, and it’s pointless trying.”

“Let’s throw in the towel and walk away while we can. There’s no point in sticking to the plan, it’s not working, and we’re not getting anywhere with it.”

“Sometimes you have no option but to throw in the towel. It’s not a disgrace; it’s a sign you know your limits.”

“Go ahead, throw in the towel, I dare you. I will stick with it, and we’ll see where I am next year. I bet you’ll regret your decision.”

“Why throw in the towel? You’re so close to achieving your goal. All the work will be in vain if you don’t persist and see things through until the end.” 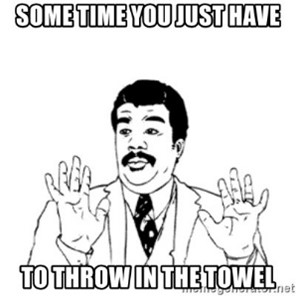 The first appearance of the expression in writing comes from the newspaper ‘Kalgoorlie Western Argus,’ published in July 1900, under the title “Boxing.”

“The final was particularly interesting, both King and Sullivan evidently intending to arrive at the actual result as quickly as possible. King’s left hand, however, met his opponent time after time and nearing the end of the second round, Sullivan was beaten out, his second throwing in the towel.”

The modern figurative meaning of the expression relating to giving up appeared for the first time in ‘The Sunday Times’ newspaper in August 1903, as follows.

“Teetotal Smith, our great Mayor, goes about looking much depressed since the poll and is, I suspect, half inclined to throw in the towel.”

Phrases Similar to Throw in the Towel

Phrases Opposite to Throw in the Towel

Ways People May Say Throw in the Towel Incorrectly

The phrase has nothing to do with throwing a towel. Using it to describe the action of throwing a towel at something you find challenging is incorrect. The towel in the phrase refers to your effort.

Acceptable Ways to Phrase Throw in the Towel

You can use the expression ‘throw in the towel’ when describing quitting or someone else’s attitude to quitting. The phrase suits professional and social use. You could say the team is throwing the towel in on the project after failing to find a solution. Or you could say you’re ‘throwing in the towel’ on quitting smoking because the stress is too much to bear.