Are you listening to someone play the piano that clearly doesn’t know what they’re doing with the instrument? You could say they’re ‘tone deaf.’ This post unpacks the meaning and origin of this expression.

The expression ‘tone deaf’ means someone with no musical talent or ear for music. It generally describes people with poor taste in music or no musical skills, but it can also refer to a real medical condition known as ‘amusia.’

People with Amusia cannot distinguish between the pitch differences in music. As a result, they don’t get the same experience as normal people when listening to music or playing instruments. Amusia affects around 4% of the global population, and it’s a congenital condition people develop at birth.

People affected by Amusia cannot discern the differences in pitch. They struggle to follow simple tunes and remember them. Most people with Amusia describe music as noise. While Amusia is the technical description of the condition, the most common use of it in English is to describe someone with no taste in music.

“I was listening to Mike play the piano. He must be new at it because he’s awful. I tried telling him he was tone deaf, but he wasn’t hearing it.”

“You brother is tone deaf. How can he like that song? There’s so much wrong with it musically. I’m shocked he thinks it’s a good track.”

“This entire audience must be tone deaf. They’re all loving this song, but I think it’s garbage. I guess it’s a case of different strokes for different folks.”

“That piano player missed the right key twice in a row. Either he’s a beginner or just plain tone deaf.”

“I’ve been trying to teach Kim to play the piano for the last year, but she can’t get it right. I guess some people are just tone deaf and don’t have any talent for it.” 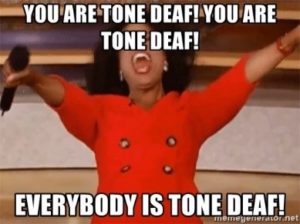 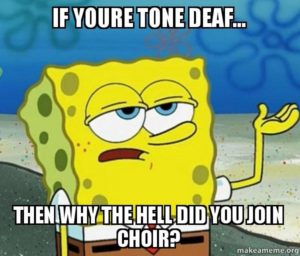 The expression ‘tone deaf’ originates from the music industry in the 1890s. Language experts are unsure who coined the term or when it first appeared in the English lexicon. However, being ‘tone deaf’ is a medical condition known as ‘amusia.’

Medical professionals created ‘The Montreal Battery for the Evaluation of Amusia’ in 2003. It’s a quantitative tool for identifying people with cognitive amusia or being born tone-deaf.

The amusia tests underwent refinement in 2008, adding online testing to the protocol to assist the standalone diagnostic tools used in assessing patients for amusia.

Phrases Opposite to Tone Deaf

The phrase ‘tone deaf’ means a person has no ability to decipher music. Tone deaf doesn’t refer to someone being unable to hear. Using it to describe deafness is incorrect.

You can use the phrase ‘one deaf’ to describe people with no taste in music. It can also refer to people that don’t know how to play a musical instrument correctly.

If someone likes a song you find terrible, you could say they’re tone deaf and have poor taste in music. Or you could use ‘tone deaf’ to describe someone awful at playing the piano.

If someone is tone deaf, they don’t realize it themselves and need someone else to point it out for them. You can use ‘tone deaf’ in social settings where you’re listening to bad music or when someone is playing an instrument badly.