Are you looking for a way to say that you’re in sync with another person or your environment? You could say that you are “vibing” with them. This post unpacks the meaning and origin of this expression. 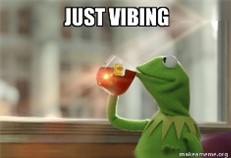 The expression “vibing” can mean that you have a good feeling and connection about your environment. You could be at a trance festival or just chilling at a friend’s house.

You can be “vibing” when you are sober, drunk, or on drugs; it doesn’t matter your state of mind, as long as you feel at one with your surroundings.

You can be “vibing” with someone else when you’re talking to them, and you feel you have a connection to what they’re saying and their interaction with you. Your body language will match, and you’ll feel the chemistry between you when you talk.

You can use the phrase to describe the “vibrations” or “vibe” you get off other people you meet or see around you.

If someone has a bad vibe, you want to avoid them. If they have a good vibe, it means you enjoy being around them.

“Vibing” with someone means that you are thinking and operating on the same wavelength as each other.

“Girl, I was out with him last night, and things between us were vibing. We totally got along with each other, and I think there’s more to our story.”

“I’m totally vibing with the music right now. It’s like the DJ is playing this track just for me. I can feel the music pulsing through my body.”

“I think I’m vibing with that. If that’s what you say, then you can count me in. I’m always up for a little fun.”

“We’re vibing together, and everything’s turning out fine. Do me a favor and get everyone else out of here so we can be alone.”

“He’s cool, but it’s not like we’re vibing when we’re together. I just don’t feel much for him when we spend time with each other.”

“Vibing is all about being in tune with your surroundings and your environment. When you get things moving, you‘ll see what we mean.”

“What are you doing here? I don’t expect to run into you. We’re all over here vibing. Come and join us.”

“I love how you’re all vibing with nature in this camp. Everyone knows everyone else, and there’s a real sense of community.”

“I’m really vibing with this venue. It’s a great choice for the wedding and everyone looks like they’re having a great time.”

The expression “vibing” originates from “hippie” slang, going as far back as the 1960s. The hippie movement would use the word to describe being in tune with the “vibration” of the universe, your environment, and other people.

The hippie movement changed into the trance movement with the departure of the seventies rock scene. Many hippies started using the expression to describe how they would take drugs and “vibe” with the music.

Phrases Opposite to Vibing

You can use the expression “vibing” to describe situations where you are in sync with your environment or other people. For instance, you could say you’re vibing with someone while having a stimulating and interesting conversation with them at the coffee shop.

Or you could be vibing with the music at a concert. The phrase suits social use to describe how something or someone makes you feel good or on the same level as them.

In some cases, it describes flirting with someone you like and feeling like they are into you as well.