Are you traveling to England? If you need the bathroom, ask for the ‘WC,’ not the toilet. This post unpacks the meaning and origin of this expression.

The acronym ‘WC‘ stands for ‘Water Closet.‘ A water closet is a ‘half-bathroom’ in the United States. Typically, a water closet has a toilet and a sink but no bath or shower. It’s a small room, usually hidden under a staircase.

British people use ‘WC‘ as a replacement for ‘restroom‘ or public bathroom. It’s considered impolite and crass to use the word toilet when speaking to British people. So, the use of ‘WC’ or ‘water closet’ is the appropriate language to use in formal situations.

British real estate listings feature ‘WC‘ in the property’s description instead of ‘half-bathroom.’

“Excuse me, ma’am, where can I find the WC? I’m desperate for the loo and can’t find one anywhere. Please point me in the right direction.”

“This house has four bedrooms, three bathrooms, and a WC. The asking price is lower than the market average, and I think it’s a great deal for a single-family home.”

“I need to make a quick trip to the WC. I should be back by the time the food and drinks arrive. Give me a few minutes.”

“Don’t you love it when you get back from the WC and your food is waiting for you at the table? It’s the best feeling ever. Let’s eat.”

“The WC is down the hall to the right. There should be a fresh towel, so remember to wash your hands.”

“I need to hit the WC before lunch. I think I was one back down on the other side of the shopping center. I’ll go have a look for it.” 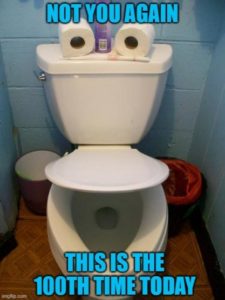 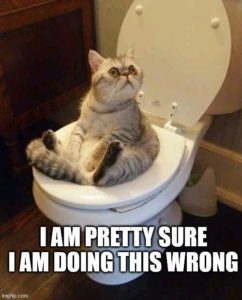 The expression ‘WC’ or ‘Water Closet’ originates from the UK, notably England. British society considered it impolite to ask for ‘the toilet.’ As a result, Britons invented several euphemisms for the word, including ‘water closet’ (WC) and ‘the loo.’

The expression appeared in English in 1755, referencing a toilet. The Oxford Dictionary defines a ‘WC’ as the following.

‘Privy with a waste pipe and means to carry off the discharge by a flush of water.’

The term is in use today, and you’ll find public restrooms in the UK labeled as ‘WC’ not ‘toilet’ on informational boards. WCs are common in public spaces and labeled as such.

Phrases Opposite to WC

Some people may use the acronym ‘WC’ to describe a full bathroom. However, a water closet is a small half-bathroom featuring a sink and a toilet. It doesn’t have a shower or bath, and there might not be a mirror on the wall.

You can use the acronym ‘WC’ when asking people where you can find the bathroom. It’s a common expression in England and the UK, but less so in the US. The British find it slightly offensive if you ask them where the toilet is, and they prefer to use the term ‘water closet’ to describe ‘the loo.’

A water closet is a half-bathroom with a toilet and sometimes a basin. You can cause the term to refer to the bathroom when visiting a friend’s home or to describe a public restroom facility. You can use the phrase in England, where it’s well understood, but people outside of Europe might not know what you’re referencing.