Did you suggest a movie to watch on Netflix, and your boyfriend replied with “yee yee?” Is he saying he wants to watch Kanye West or something? This post unpacks the meaning and origin of this expression.

The expression “yee yee” is a confirmation statement showing you agree with what the other person is saying. It’s more common for the phrase to have straightforward than sarcastic use. “Yee yee” means “you’re right” and that you intend to act on a person’s request.

“Yee yee” can also serve as a motivating statement. Hunters will use it to say “up and at ‘em” or “let’s get it.” Hunters and outdoors people will usually use the saying to exclaim their joy and satisfaction. For instance, they may use it when chasing an animal or after making a kill.

The expression “yee yee” has rural origins, but outdoors people across America use the term to describe their state of excitement.

It’s also a common reply in street slang when you want to agree with someone on a point. It’s similar to “for real for real” (FRFR) in this regard and has the same meaning to the other person.

“Am I ready for this? Yee yee, let’s get it. I got the shotty ready to go and the gasoline in the car for when we need it.”

“Let’s head out onto the water for some quality fishing time. Yee yee, let’s get on it, the day is young, and the fish are waiting!”

“Yee yee, I hear you. We’ll make sure we keep that in mind when we’re out there today. Don’t worry; safety is our priority.”

“Yee yee,” it’s time to head for the gym and get in today’s workout. I’m pumped up for it and ready to lift some heavy iron today.”

“Yee yee, let’s get it. This is five rounds for the middleweight title of the world, and I think Adesanya has this one in the bag. It’s his title to lose.”

“Yee yee, you know I’m down to hit Taco Bell after this. I’m starving, and I can’t wait to smash a few tacos into my face.” 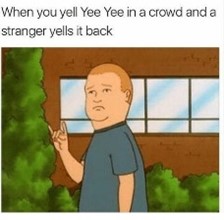 The expression “yee yee” originates from the country-living communities in the rural southern United States. Language experts are unsure when the phrase started appearing in language or how it spread into mainstream use in America and around the world.

The phrase from communities in states like Louisiana into widespread use across the entire country and the globe. It’s a common saying online where people use it as a confirmation statement or a motivating statement to say they plan to take action.

The earliest entry of the phrase into the Urban Dictionary is in late 2012. However, language experts believe it’s been in use for much longer.

Phrases Opposite to Yee Yee

The phrase “yee” refers to a dinosaur, but that has nothing to do with the meaning or origin of this expression. “Yee yee” is another way of saying “yeah yeah,” but with a country-style accent reminiscent of the folks in the southern United States in areas like Louisiana.

You can use the expression “yee yee” as a confirmation statement to show your agreement and excitement with what other people have to say.

The phrase might have country origins, but it’s common to hear it in cities across America, in crowds, and even in online text communications.

You can use the phrase when you want to show someone that you are on board with a decision, task, or project and you’re ready to start.

The term suits social communications and is not ideal for professional use.

Typically, you’ll be using “yee yee” with a positive connotation.