Are you looking for a phrase to voice your surprise or disappointment at events? You could use “ay caramba!” to exclaim your distress. This post unpacks the meaning and origin of this expression.

The expression “ay caramba!” is a reactionary statement. It means that you’re surprised or in shock at someone’s actions or words. It’s an informal term, and many people mistakenly think it has a Latin-American origin. It’s a phrase where you’re voicing your distress or concern over something and a similar expression to “oh my goodness.”

“Ay caramba!” usually appears with an exclamation point at the end of the expression in written format. It’s a way of expressing the urgency and shock in the phrase. Typically, you’ll use this in mildly disturbing scenarios.

“Ay caramba! I think Moe finally figured out who’s prank calling him. He’s on the way here right now with a baseball bat.”

“Ay caramba! That was a close one there, and we almost lost Homer to that gang of ravenous gorillas.”

“I looked around the corner, saw the wolves running towards us, and said Ay caramba! Before fleeing on foot as fast as I could.”

“Ay caramba! What are you doing? There’s no need to act like that right now; we’re not in danger.”

“Ay caramba! We’re in trouble now, keep running, or the cops will catch up to us, and our parents will kill us.”

“You pull into the driveway, and the first thing I notice is the cracked windshield. Ay caramba, I can’t trust you with the car anymore.”

“Why do we always have to wait an hour when we order food from this place? Ay caramba! Are they ever going to send the order over?”

“Ay caramba! There’s no way out of this that I can see, and the water is filling up faster every minute.” 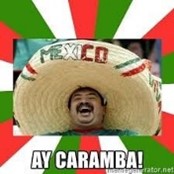 When most of us think of the expression “ay caramba,” we think of Bart Simpson from the classic animated TV show, “The Simpsons.” “Ay caramba,” was one of Bart’s signature catchphrases on the show, and viewers would hear him say it all the time.

However, the first use of “ay caramba” comes from the 1700s. The expression is associated with a description of a flamenco dancer from Madrid. The lady wore brightly headdresses, later known as a “caramba.”

It’s a Spanish term, and it may be over 300-years old. However, it gained widespread popular use thanks to the antics of Bart and the popularity of The Simpsons.

Phrases Opposite to Ay Caramba

The phrase is a way of voicing surprise, concern, or disapproval of another person’s actions or the outcome of an event. It’s not suitable for professional use as its slang language and not appropriate for formal communications.

You can say “ay caramba,” when you’re expressing distress or surprise at someone’s actions. It’s a way of telling someone that you can’t believe what they did and its effects around you. The phrase suits social communications and improper language for business use.