Are you looking for a way to tell someone to hurry up? You could tell them “andale!” to get them to start moving. This post unpacks the meaning and origin of this expression.

The expression “Andale” means to hurry up. In writing, it’s often proceeded by an exclamation point to show the urgency of the word. It’s a Spanish word translating to “hurry up,” but it can also mean that you are in agreement, and you should leave immediately to do whatever you agree with.

Surprisingly, it’s also a popular word appearing in Persian hip-hop tracks. It can also have a slang meaning referring to diarrhea. The “Arkansas andale” phenomenon is an established term and appears in the Urban Dictionary.

However, the more common use of the term is for telling someone to hurry up, or they’ll be late for an event or activity.

“Andale, Andale, Ariba! Man, I loved watching Speedy Gonzales cartoons when I was a kid. They were hilarious.”

“Andale kids. The bus will be here in five minutes, and you haven’t finished your breakfast yet. Hurry up, or you’re going to miss it again.”

“So, I turned to the Latino guy at work and to him to get me a new stack of boxes, Andale. Now he’s suing me for racism and hate speech in the workplace.”

“Andale, we’re the best rappers in Persian hip hop, and we know what the crowd wants.”

“Andale, you can do it. Pick up the pace for the last minute, and you have this in the bag.”

“We threw the bag on the floor right as the cops came around the corner. I leant over to him and said, Andale, it’s time to run!” 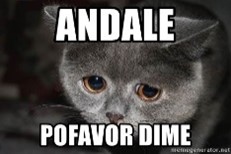 The expression “Andale” comes from Spanish. It was the catchphrase of a Looney Toons character, Speedy Gonzales. Speedy would use it in his motto before speeding off into the sunset or running away to commit a good deed for other mice.

“Andale” is also the name of a small town in South Central Kansas. It has a white, catholic population and a reputation for producing good-looking men and women that are sexually frustrated after attending Catholic school for their former years.

However, the phrase retains the meaning of the Speedy Gonzales catchphrase, and it means that you want someone to hurry up. Looney Toons was one of the biggest influences on the baby-boomer and Gen X generations. Many people who watched these cartoons will remember Speedy saying, “Andale, Andale, Ariba!” before dashing off into the distance.

Phrases Opposite to Andale

Some people may use the phrase “Andale” in the Looney Tunes version “Andale, Andale” as a racial slur. If you are a white or black person and use the expression when telling a Latino to hurry up, it’s technically racism.

Therefore, the use of this phrase is fading out, and it’s less common to hear it outside of the Latin-American community. It’s also common for people to misspell the saying as “Adile”.

You can use “Andale” when you’re trying to tell someone to hurry up and get ready. You could be leaving for an event or a dinner reservation or the football team coach asking the players to take a lap. The word suits social use more than professional use due to the stigma and cultural appropriation attached to the saying.