Are you looking for another way to exclaim disappointment or excitement? You could try using the saying “ay Dios Mio” as a way to voice your emotional state. This post unpacks the meaning and origin of this expression.

The expression “ay Dios Mio” is Spanish for “Oh my God.” It’s a versatile saying and suits use when exclaiming sadness, disappointment, happiness, shock, and many other emotions. Most use the expression when people are getting on their nerves. You use it to tell them to go away or stop talking to them.

It’s also a popular word to use after you have a bad experience with someone or something or an accident. If you’re involved in a minor car accident, you would say “ay Dios Mio” to exclaim your surprise and shock at the situation. If your son gets into trouble with the police, you could use “ay Dios Mio” to describe your disappointment in their behavior.

It’s a versatile saying, and it suits use on many occasions. Since many people understand its meaning, many people that don’t speak Spanish will use it from time to time. It’s not offensive to Spanish people if non-Spanish speakers use the word.

“Ay Dios Mio,” what have you done? There is no way we can fix this before the parents find out. We’re in for proper hidings when they get back from the store.”

“Ay Dios Mio, that’s shocking news. I was just with him yesterday, and now he’s gone. When is the funeral? I want to pay my respects.”

“Oh Michael, ay Dios Mio. I give you the car for the evening, and you crash it into a tree because you were drinking with your friends. I don’t know if I can trust you again.”

“She did what? Ay Dios Mio, that’s just unacceptable, and someone needs to put her back in line before she hurts more people.”

“Ay Dios Mio, that’s no way to treat a lady. How can you expect her to accept your request for a second date after behaving like that?”

“Ay Dios Mio, Why does this always happen to me right as I think things are just starting to go right in my life?” 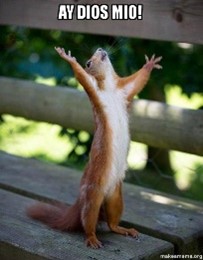 The expression “ay Dios Mio” originates from the Spanish language. Experts are unsure how it ended up being a phrase used in English. However, many attribute it to the influx of immigration from the southern border. Californian communities have long since been integrating Spanish words into English conversation.

There is no evidence showing the integration or first use of the phrase in English. The term seems to start to gain traction in English-speaking communities in the early 2000s. The earliest entry of the saying into the Urban Dictionary is in December 2004

Phrases Opposite to Ay Dios Mio

People may use “ay Dios Mio” to replace other Spanish sayings but in the wrong context. If you’re not a natural Spanish speaker, then there’s a good chance you will confuse the expressions at some stage.

You can use the phrase ay Dios Mio when you’re exclaiming your frustration, anger, or disappointment at an occurrence. The phrase is more common in Spanish communities, but it’s also found on the West Coast and around the southwestern states where Latin communities reside. It’s a versatile saying and suits social use.