Did someone just exclaim the expression “Wallahi” around you? What does it mean? Is it a greeting or a battle cry? Should you be nervous, or excited to meet someone? This post unpacks the meaning and origin of this expression.

The expression “Wallahi” means “I swear to God.” It’s a common saying in Muslim communities, and it suits situations where you want to exclaim grief, happiness, despair, and many other emotions. The word is most popular in Northern African countries, with Somalia and Egypt being the most common areas where you’ll hear the local population using it.

You can use the expression when you’re mad at a friend for teasing you. You could use it to exclaim your happiness when someone gives you a pleasant surprise. Use it to voice your disappointment at hearing bad news. You can even use it when you exclaim that your pizza is really tasty. It’s a versatile saying and suits many occasions and circumstances.

Wallahi is gaining popularity as a saying, particularly in Canada. It’s a common street greeting around Toronto and the GTA. However, if you aren’t Muslim, using the term might be seen as cultural appropriation by some. As a result, it’s only really suitable for Muslim people to use it.

“It’s another day, the sun is shining, we have food on the table and money in the bank. Wallahi, I will keep my faith today because of the bounty God gives me.”

“I owe Allah everything in my life. He has brought me great joy and great suffering. Wallahi, I stay dedicated to the path and will praise you forever.”

“Wallahi! Why have you done this to me? What did I do to deserve your wrath? I beg for forgiveness and throw myself on your mercy.”

“Wallahi, if you think about doing that one more time, I will come down on you like a ton of bricks. Don’t try me.”

“Wallahi, I’m so mad with you right now. Get out of my sight before I blow up and do something I regret.”

“Wallahi, my life is so good because I attend mosque every week, pay my tithing, and help out in the community. The more you do for others, the more they do for you.” 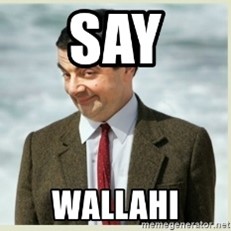 The expression “Wallahi” originates from the religion of Islam. It translates to “I swear to God,” and there are several uses for the term in modern language. Language experts are unsure when it entered the Arabic language, but some think it originates from the Northern African region of Egypt and Somalia.

Experts are also uncertain how the word made such an impact on Toronto street culture. It’s also spreading in use around New York, thanks to the integration of Muslim families into the local communities. The first reference to it as a slang term appeared in the Urban Dictionary in October 2004.

Phrases Opposite to Wallahi

Some people that are not practicing Muslims may use the phrase to describe frustration. However, it’s somewhat insulting to people that practice Islam when people use their culture without representing it. Some people may use the saying as an insult toward Muslim people, and this would classify as a hate crime.

You can use “wallahi” as a phrase praising Allah if you are a practitioner of Islam. It’s a suitable way of showing submission to Allah and thanking Him for His intervention in your life. The phrase suits practitioners of Islam only. Using it outside of the Muslim faith would be disrespectful to the culture.

The phrase is popular in Arabic and North African countries. The Somalis use it frequently, and it’s a way of them saying “thank you” or “appreciate it.” If you are a dedicated Muslim, you probably find yourself using it from time to time.