Did your friend just type “ISTG” in the chat? This post unpacks the origin and meaning of this idiomatic acronym.

“ISTG” is an idiomatic acronym referring to the phrase “I swear to God.” “I swear to God” is a popular expression used in western culture, especially over the last few decades.

However, many people will also use the phrase in an attempt to deceive others. Back in the day, during the original use of the words, people had a lot more faith in higher powers than they do in today’s secular society.

“ISTG, if you don’t stop trying to get with my boyfriend, I’m going to lose it with you.”

“What are you talking about, Don? ISTG if you start drinking again, I’m leaving you for good this time.”

Gwen: “We were right there, and Kevin tried to kiss me, but I slipped him and gave him the cold shoulder instead. It was shocking.”

Kim: “I can’t believe it, ISTG; I’m done with Kevin; I never want to see him again.”

Simone: “There I was, minding my own business, when this crazy guy came up to me at the bus stop asking for change. He wouldn’t leave me alone.”

Shaun: “If he had hurt you, ISTG, I would hunt him down and bring him to justice.” 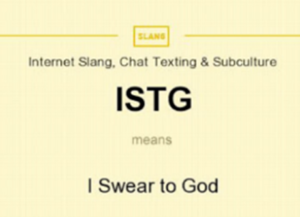 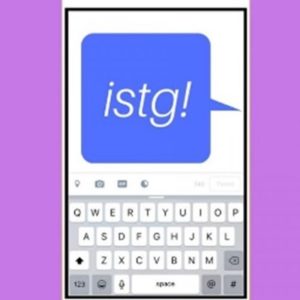 The idiomatic expression “I swear to God” is popular in modern culture, and it’s one of the oldest sayings on record that we still use today. The Old English word, “swear,” means to take an oath. The phrase has origins as far back as the middle ages, where people would use it to show their innocence at an accusation.

In the middle ages, to blaspheme was a sin, and to use God’s name out of anything but praise could land you in trouble with the clergy. As a result, when people would use the phrase “I swear to God,” they would emphasize their innocence.

If the person lied, they would risk the journey to hell in the afterlife. As a result, it was a way of telling people that you “swear on your mother’s grave” that you didn’t do something they are accusing you of doing.

“I swear to God” lost its religious significance in the late half of the 20th century as society moved to a more secular construct. As people started to use the phrase more regularly, it became popular, especially among youth.

The advent of messaging platforms led to the abbreviation of “I swear to God” to the acronym “ISTG.” The shortening of the phrase was to prevent the extra time and effort of typing out all four words.

Phrases Opposite to ISTG

Some people may use ISTG in the wrong setting, such as around religious people. Christian denominations and Jewish communities don’t permit the use of God in language as it’s a form of blasphemy. Some people may complain, even with the help of the abbreviated version of the phrase.

ISTG has its biggest use online in messaging apps and chat rooms. It’s a way of reducing the characters you have to type to instill the same feeling of urgency, shock, or surprise in what you have to say or respond to others or an observation.