Are you looking for a way to describe someone that displays ‘anti-woke’ behavior on a message board like Reddit? You could say they are ‘red-pilled’ and ‘based,’ to describe their political ideology. This post unpacks the meaning and origin of this expression.

The expression “based” has several meanings. The most popular meaning is that someone shows ‘anti-woke’ behavior, usually leaning toward right-wing ideologies.

Based also means something is ‘cool’ or ‘agreeable.’ Or it can mean that you are comfortable in your own skin and not easily swayed by peer pressure.

The word also appears as part of the phrase ‘based and red-pilled’ on forums like Reddit and 4Chan. However, some people believe the term is a part of ‘troll’ culture, where people use it as satire or sarcasm when referring to woke ideology.

“Look at this anon. He is so based. I don’t know what to do with this guy. Should I ban him from posting in the thread?”

“I’m feeling so based right now. I don’t care what’s going on. Just give me another hit of that pipe.”

“You need to be comfortable in your own skin to avoid anxiety in social situations. When you feel based, you don’t worry about what other people think of you.”

“I’m, feeling so based right now. What was in that stuff? Are you sure the dealer didn’t lace it with something?”

“When you don’t have to worry about what life throws at you anymore, you’ll find you have a based approach to life, and things improve for you.” 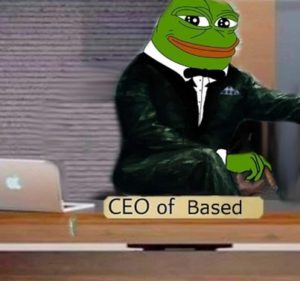 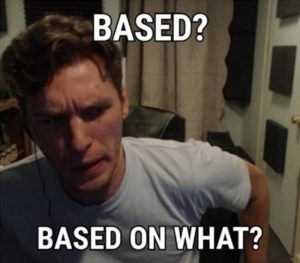 The expression “based’ has several origins. The original use of the phrase, referring to some who are cool, calm, and collected, comes from the rapper ‘Lil B,’ aka ‘Based God.’ Lil B earned the moniker because he was a former drug user or ‘basehead.’

Lil B decided to take back the term, transforming the meaning to “being yourself.” Lil B says it’s a positive phrase and means that you believe in yourself and your abilities.

4Chan, the popular internet message board, uses the word ‘based’ to describe anti-woke or ‘red-pilled’ behavior posts and comments. If someone is based, they have right-wing political associations. However, 4Chan culture often involves sarcasm and satire, and some people say they use of ‘based’ is a mockery of woke people and a troll phrase used to entice anger in the woke mob.

Phrases Similar to Based

Phrases Opposite to Based

Ways People May Say Based Incorrectly

It’s more common for people to use the word ‘based’ to describe anti-woke behavior online. While it also means that you feel comfortable being yourself, it’s the less-common use of the expression. Using ‘based’ online would only refer to anti-woke behavior, especially in forums like 4Chan and Reddit.

Acceptable Ways to Phrase Based

You can use the expression “based” in different situations and with different meanings. If you’re speaking to someone face-to-face, you’re likely saying that you feel grounded and comfortable in your own skin.

If you’re using it online in forums like 4Chan and Reddit, you usually refer to anti-woke content or comments. It means you identify a piece of content of comment behavior that is ‘red-pilled’ or right-wing. This version of ‘based’ is the more common use of the term.

Based can also refer to someone that looks like they’re under the influence of hard drugs like crack or meth.