Are you looking for a way to say someone passed on? If they’re a member of the military or armed forces, you could say the person “bought the farm.” This post unpacks the meaning and origin of this expression.

The expression “bought the farm” means to die or pass away. Typically, it refers to the death of people in the military or the armed forces. The phrase may apply to people you know or never met.

If you bought the farm, you died in a military exercise or battle. The phrase can also refer to law enforcement officers who die in the line of duty.

You can use the saying to describe the death of civilians, but it’s not the technically correct use of the expression.

“Did you hear about Mike? He bought the farm in service to his country last weekend. He was on a mission with his SEAL team when they got ambushed by the enemy.”

“It scares me to think how many servicemen and women bought the farm in the Afghanistan war. What a senseless waste of life.”

“Tom was an operator with the Green Berets and one of the most decorated soldiers in his squadron. He bought the farm last weekend after a training exercise went wrong. What a pity.”

“Did you see how many soldiers died in service to their country during Vietnam? It was sad to read how many of them bought the farm.”

“Oh my goodness. John just bought the farm during his patrol this evening. Some junkie pulled a knife on him and stabbed him to death. Tragic.”

“Jim bought the farm over the weekend. He was on the firing range when his service pistol malfunctioned. The squib load caused the gun to fragment. A part of the pistol lodged in his brain, killing him instantly.” 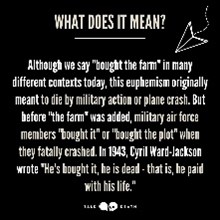 The expression “bought the farm” originates from the mid-20th century. The earliest recordings of the saying all have a military reference. The earliest rendition of the phrase in print comes from The New York Times Magazine in March 1954.

The magazine published an article referencing a glossary of pilot slang, where it appears as follows.

“Bought a plot, had a fatal crash.”

The 1940s saw the saying change form. Cyril Ward-Jackson used the phrase “He’s bought it, he is dead – that is, he has paid with his life” in 1943 to describe the passing of an air serviceman.

The first recorded use of the modern saying “bought the farm” appeared in the mid-1950s. The earliest use of the exact phrase appears in 1963, in “Exile to the Stars,” written by Ed Miller, where it appears as follows.

“The police dispatcher says a plane just bought the farm.”

Phrases Similar to Bought the Farm

Phrases Opposite to Bought the Farm

Some people may use “bought the farm” to describe the death of someone that isn’t a member of the military or law enforcement.

While this is not technically incorrect, it’s not the meaning of the expression. It’s also a somewhat crass and crude way of talking about someone dying and will be offensive to family members of the deceased.

You can use the phrase “bought the farm” when referring to someone passing away. Typically, the saying refers to the passing on of military personnel, such as armed forces or law enforcement members.

You can use the saying in professional and social situations. You can use the expression if you’re a member of the police and a colleague passes away on the job or for other reasons outside of work. However, the saying is only suitable for use with colleagues or friends, not the deceased family members.