Are you looking for a word to describe getting worked over by the same thing twice? You could warm your colleagues or friends with the acronym “BOHICA” when it’s time to prepare for a repeat. This post unpacks the meaning and origin of this expression.

The acronym “BOHICA” stands for “Bend over! Here it comes again!” It’s a somewhat humorous statement and said in preparation for coming events. Typically, the events are a repeat of a previously experienced bad outcome.

For instance, your boss coming back to criticize the staff for the second day in a row would merit the use of BOHICA before he arrives for the ordeal.

It’s common for people to equate “bending over” with being punished unfairly by an authority, like a schoolteacher or boss. So, you could use it if you’re in for another round of discipline from an authoritarian power. You’ll use BOHICA to describe the act of preparing for the punishment to arrive.

It’s more common for people to use this saying in the workplace, as most kids won’t know what it means, so they won’t apply it to discipline from their parents.

“Oh no. I just got off the phone with the boss, and he’s coming over again in an hour. Bad news, he’s more upset than yesterday, so BOHICA and expect for another ear beating this afternoon.”

“You better BOHICA because the boss is coming over to lay into you again. He found out you didn’t lock up properly last night, and he’s raging.”

“All right boys, BOHICA, the enemy is sending another volley. Everybody brace for impact and look out for the person next to you.”

“BOHICA people. We’re not through this yet. The next set of waves is going to be bigger than the last. Make sure you have your PFD fastened securely.”

“Hold on and BOHICA. We knew this thing wasn’t over yet, so buckle up for it. We’re in for a wild ride again.” 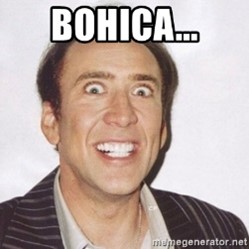 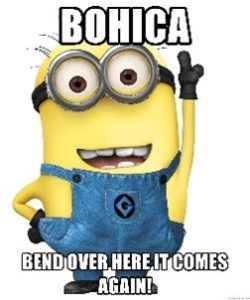 The expression “BOHICA” originates from the comedy magazine “The Log” and a comic strip “The Bohica Brothers.” The Log published this strip starting in 1970, and the word “Bohica” had the same meaning as it does today as an acronym.

Experts believe the saying originates from military slang, particularly from the Army and Navy. However, there is no written record of its first use in the military. Author Scott T. Barnes published his book “BOHICA” in 1987.

His book describes the definition of BOHICA as “Bend Over, Here It Comes Again,” describing it as a code word used in communications between the CIA and NSA.

BOHICA appeared in the Urban Dictionary in 2003 with the definition of “getting screwed over by the same means twice.”

Phrases Opposite to BOHICA

“BOHICA” is military slang adopted into modern language. It means “Bend Over; Here It Comes Again.” However, there are several ways to interpret this acronym.

If you search forums and message boards like 4Chan, you’ll see memes and references to “BOHICA” with a sexual connotation. While this interpretation of the word is valid and popular, it’s not the original meaning of the expression.

You can use “BOHICA” to warn people of the second round of punishment or reprimand. For instance, you could get off the phone with your boss and alert the team that he’s coming back to the store again to yell at everyone about their performance for the quarter.

You use BOHICA to warn others to brace for impact because they are about to repeat a recent adverse event or trauma. The reaction to the word is usually one of disdain, surprise, fear, or anxiety. You’ll usually be using BOHICA in a professional setting at work to warn colleagues.