Did someone ask you to accompany them somewhere you’ve been before that you found highly uninteresting? If so, you could tell them that you’ve “been there, done that” as a way to say that their suggestion doesn’t excite you. This post unpacks the meaning and origin of this expression.

The expression “been there, done that” means you have already done a task or attended an event or place to the point of boredom. It’s a way of expressing you have no interest in doing what other people suggest.

The saying can apply to any suggestion from another person where you feel bored or uninspired by what they want to do. You can use it to describe feelings of apathy or as a segue to suggest something you find interesting as a replacement for the original idea.

“Francesca’s again? Been there, done that. Let’s rather go somewhere else for dinner this evening.”

“Mexico? Been there, done that. Let’s go to Europe for our summer vacation this year.”

“No, I’m not keen on that place. Been there, done that. I want a new, fresh experience, not the same old thing.”

“Socialism? We’ve been there, done that several times in history. It never works out the way the people expect.”

“I want to get one of those ‘been there, done that” shirts to remember my trip to New York City. I’m sure I saw them selling them at that bazaar.”

“You want to go diving this weekend? Been there, done that. It’s not as cool as you think.”

“Let’s skip the club this weekend and do something else. It’s getting old, and I feel like I’ve been there, done that a hundred times.”

“Fishing at the lake? Been there, done that. Call me when you want to go fishing someplace different.” 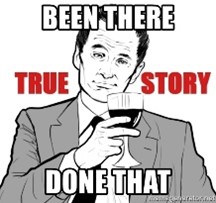 The expression “been there, done that” originates from the 1970s. The phrase first appeared in the shorter format “been there.” Unlike many idiomatic phrases, this is one of the rare examples where the expression added words rather than removed them from the saying.

An early example of “been there” comes from the American novelist Edwin Torres, in his book “Carlito’s Way,” published in 1975, where it appears as follows.

“Miss Tewes, who has just got divorced, says she doesn’t plan to get married at this time. Using an Australian expression, she says, ‘Been there, done that.'”

Phrases Similar to Been there Done that

Phrases Opposite to Been there Done that

Ways People May Say Been there Done that Incorrectly

The phrase can apply to situations, locations, and people or inanimate objects. Some people may use it to describe tasks they have never tried or places they have never visited, just because the thought of it bores them.

Acceptable Ways to Phrase Been there Done that

You can use the phrase “been there done that” to voice your disdain or boredom with other people’s suggestions. You could use the term to describe how you don’t want to go to a restaurant, bar, club, hotel, or any other task or visitation. Typically, you’re telling the person that the thought of complying with their suggestion is boring.

The phrase suits social and professional use. You could use it to describe your boredom or lack of inspiration at other people’s suggestions or ideas. Or you could use it to tell your colleagues that you’ve already been through all your leads, and you’re not going to call them all again. It’s a way of telling someone you have already experienced what they want to do, and it doesn’t excite you.