Did a Latin American woman cast a spell on you? You could call her a ‘bruja.’ This post unpacks the meaning and origin of this expression.

The expression ‘bruja’ translates from Spanish to ‘witch’ in English. If someone is a ‘bruja,’ they may practice the art of witchcraft or follow a spiritual practice or dogma outside the traditional monotheistic religions, like Christianity.

Witchcraft doesn’t mean that women dressed in black clothing and pointy hats stand around a pot cackling amongst each other. A witch is a ‘Wiccan’ and usually means someone who practices the spiritual art of connecting with nature and energy in their environment.

Witches can have bad or good intentions. Some may place curses and use their gift to bring harm to others. Others may use it to connect to nature and other people.

“I was scrolling on TikTok the other day and came across this trend of ‘bruja’ posting videos about casting spells. It’s interesting stuff, and I think I might try it.”

“That Latin-American girl is a Bruja. She dresses in black and uses makeup to make herself look intimidating and evil. Some people are just weird.”

“Some Bruja is genuinely evil, and they practice black magick. However, they are few and far between, and most of them aren’t devil-worshippers.”

“Are you a Bruja? Please can you help me with casting a spell for prosperity? I need a change in my economic situation, and I’m willing to try anything.”

“My sister thinks she’s a Bruja. She’s always casting spells and chanting, but it doesn’t seem to make much of a difference in her life.” 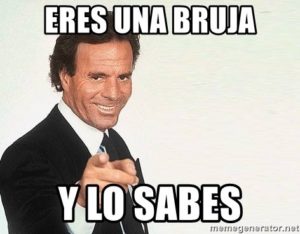 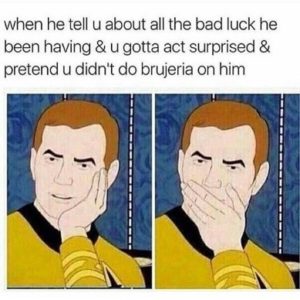 The expression ‘bruja’ originates from the Spanish language. It’s a Latin-American term defining a deeply personal practice of witchcraft. It includes the spiritual practices of Macumba, Yoruba, Vodou, and others.

Some witches will embrace the term, while others find it offensive or outdated. The reason for these mixed feelings when using the word comes from the stigma associated with magical communities and practitioners. It’s especially prevalent in mixed-race communities where people might not understand the practice.

The term ‘bruja’ originated from the colonization of Latin America by the Spanish and Portuguese in the 15th century. Native healers used traditional medicine and magick when treating people for physical and mental ailments. However, the Roman Catholic Church forbade these practices.

Phrases Opposite to Bruja

‘Bruja’ is a Spanish expression, and it’s a common term to describe a witch in Latin-American communities. However, the phrase doesn’t have much use in English, and it’s limited to Spanish-speaking communities in the Southwestern US and around Florida and New York, where there is a significant Latin-American presence.

You can use the expression ‘bruja’ when referring to witches, witchcraft, or dark energy. It’s a Spanish term and doesn’t have much use in English other than to describe a ‘witch’ of Latin-American ethnicity. Bruja’ can also define witchcraft and refer to acts of casting spells and other ritualistic practices involving witchcraft.

If someone is a ‘bruja,’ they usually dress in black and use makeup to give themselves a dark or evil appearance. The term suits real-life interactions and social media, and you can use it on platforms like TikTok, Instagram, and Twitter to describe witches of Latin-American ethnicity. Typically, the phrase applies more to women than men.