Are you hearing more about ‘cancel culture’ in media? This post unpacks the meaning and origin of this expression.

The term ‘cancel culture’ refers to a subset of ‘woke culture’ responsible for calling out people in power or those with influence online. If someone ‘cancels‘ you, they attempt to have your followers on social media disown you and ruin your public profile in media.

It’s common for influencers and celebrities to be the target of cancel culture. While it originally started as an equality movement, many people now believe cancel culture is nothing more than modern censorship.

Cancel culture is also known as ‘call-out culture.’ It has mostly negative connotations in debates regarding free speech and censorship. Cancel culture is a form of boycotting or shunning an individual deemed to have spoken or acted unacceptably.

“Did you see they tried to cancel uncle Joey last week? The woke mob is taking cancel culture to a whole new level. Uncle Joey never did anything to nobody. Why are they coming after him?”

“The woke mob tried to cancel Joe Rogan several times over the last year. It’s funny because they fail at it every time, and Rogan keeps on truckin.”

“These people are crazy. I don’t get why they try to cancel people they don’t agree with online. Twitter is becoming the center of toxic culture online.”

“People who participate in cancel culture are toxic. You should avoid them at all costs. They have nothing better to do than try and ruin people’s lives.” 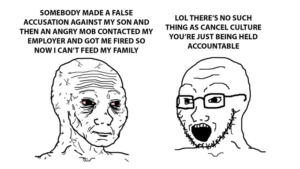 The term ‘cancel culture’ describes a movement starting around 2015. It’s part of a collective of social issues, including gender politics, Black Lives Matter (#BLM), and #MeToo. These movements started with noble intentions of calling out people that oppress others.

For instance, the #MeToo movement helped women confront male oppressors in the workplace, while BLM fought for racial equality and against police brutality toward African-Americans. However, over the years of its development, cancel culture moved towards a far-leftist agenda.

Members of ‘woke’ culture, also inspired by the advent of cancel culture and gender identity politics, started to attack and harass people and brands online that they thought were against the public interest. In reality, they became targeted attacks on people online, coordinated by far-leftist extremists.

Phrases Opposite to Cancel Culture

The term ‘cancel culture’ applies to all aspects of culture, online and offline. The expression differs from a boycott in that you are removed from social media platforms unwilling, and people will never return to viewing your content.

If you say anything out of line that the woke mob disagrees with, prepare for them to harass you online. You’ll receive thousands of DMs and replies to your posts telling you you’re canceled, and no one will read or review your content on social media. In most cases, being canceled refers to users on social media forcing you to close your account.