Are you talking to a girl and find yourself caught in a ‘rising’ situation? You could say that you’re feeling ‘bricked up.’ This post unpacks the meaning and origin of this expression.

The expression ‘bricked up’ means getting an erection at the wrong time. Typically, teens and men in their twenties experience the sensation of being ‘bricked up’ in class or at work.

It’s when you have a hard-on and can’t move around because people will see it through your pants. People will use the term to point out people with an erection walking around in public.

However, the woke mob recently got hold of the term, calling it sexist. As a result, the woke mob is running a campaign to claim the expression. Apparently, the new woke definition of ‘bricked up’ will mean when something has you feeling depressed or blue.

As hip-hop terminology, it will be challenging to change the meaning of this expression and its use in the online community..

“Man, this girl got me bricked up. I can’t get up in front of everybody, or they’ll see me pitching a tent for sure.”

“Yo, I was so bricked up when I talked to Amy. Just looking at that girl’s face is enough to get me hard as hell. She’s so damn fine.”

“What do you do when you find yourself all bricked up when talking to a girl. I usually just try not to move and keep their attention on my face.”

“Man, I’ve been watching this movie, and it’s been a while since I had some. Now I’m feeling all bricked up after the love scene.”

“Toms all bricked up right now; look at the bulge in his pants. Ha! I knew you had a thing for Lindsay. Now you’re showing everybody your feelings.”

“I hate it when I’m in school and get all bricked up at my desk. I have to sit there and hope things flatten out before the end of class.”

“It’s so embarrassing when people catch you bricked up. I can’t imagine how embarrassing it must be to have a girl notice it.”

“Damn, son, I’m all bricked up right now. That girl got me vibing, and I think she’s so hot.” 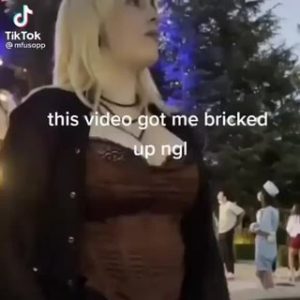 Language experts are uncertain about the origin of the expression ‘bricked up.’ However, it is believed the term comes from street slang and hip-hop culture. It was a common saying in hip-hop lyrics and street slang in the 2020s. However, the first recorded entry in the Urban Dictionary was in October 2021.

The term spread through culture during 2020, 2021, and 2022, cementing itself as a reference to ‘getting hard.’ While there is no official explanation of the term, it appears it’s a straight term and not connected to the LGBTQ+ community.

Phrases Similar to Bricked Up

Phrases Opposite to Bricked Up

The phrase has nothing to do with bricking a wall or any form of masonry work. It refers to a man experiencing an erection at the sight of a hot woman. Most people who use this term are familiar with and understand street slang and hip-hop culture.

Acceptable Ways to Phrase Bricked Up

You can use the phrase ‘bricked up’ when you want to describe the fact you have an erection in public due to staring at a hot woman. It’s a hip-hop colloquialism, and you can use it to describe the behavior of yourself or others. Typically, it suits used by African-American men or white men in their teens, twenties, or thirties familiar with hip-hop culture.

You can use the phrase in face-to-face conversations, texts, or online communications on message boards and forums. While the term describes the act of getting ‘hard,’ it usually refers to straight men looking at hot women, not gay people.