Are you looking at a tall, sexy Latin woman surrounded by bodyguards? If you’re in Mexico City, you might be starring at a ‘buchona,’ so it’s best to look away.

The expression ‘buchona’ is a Mexican slang term referencing the wife or girlfriend of a cartel member. She typically dresses in the latest designer fashion, spends thousands of dollars on hair and makeup, and loves the thrill of wealth and power from marrying or dating a cartel member.

The buchona can marry any cartel member at any level and receive the title of ‘buchona.’ The buchona has a flamboyant personality, and they enjoy the finer things in life, like dining at the hottest restaurants and shopping in boutique stores. They often travel with a security detail and in convoys of large, black SUVs.

The buchona is usually a very attractive woman. She leverages her beauty to get what she wants out of life – money, and power.

“Check out that buchona over there. She’s got an LV handbag, gold Dior glasses, and about six bodyguards around her at all times. The life of a gangster’s wife.”

“I’m tired of suffering through life. I’m going to marry a rich cartel member and become a buchona. I don’t care if I’m selling myself out to the cartel. I want to be rich.”

“You know you’re a buchona if you want money and power more than your self-respect. A buchona isn’t afraid to use her beauty to get what she wants in life.”

“Those narcos always have the hottest wives. I heard ‘buchonas’ are the wives of cartel members, and they are as ruthless as the men when it comes to money and power.”

“The buchonas are waiting for us, gentlemen. Let us get back to the dinner table and discuss pleasantries. We’ll discuss business later.”

“My sister is a buchona. She married a cartel guy for the money and regrets it. She can’t get away from him.”

“I wouldn’t step to that buchona if I were you. Her bodyguards will come out of the shadows and give you the beating of your life.” 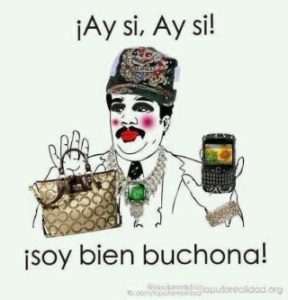 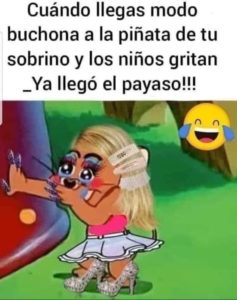 The origin of the expression ‘buchona’ originates from the Spanish language. Buchona means different things in south American and central American countries. However, the Mexican version is the more common variant, especially as it’s interpreted in the west.

The word ‘buchona’ comes from the Latin word ‘bucula’ and the French ‘bouge.’The integration of these terms means ‘blister’ and ‘bag,’ designate a bag where birds deposit food. The meaning of these words share the same origin, but they have different meanings, dependingon the context, much like the term ‘buchona.’

Language experts believe there is a relationship between a ‘crop’ of birds and the saying. The Mexican meaning of “big crop” is someone who lusts after luxury and wealth.

Phrases Opposite to Buchona

The word ‘buchona’ has different meanings in different parts of central and south America. Some people may use ‘buchona’ to describe a ‘butch’ lesbian. However, the definition of a cartel member’s wife is the more common use of the term.

You can use the phrase ‘buchona’ to describe a Latin woman that’s attracted to gangsters in the Mexican cartel. A buchona is a very pretty woman with a curvy body and sexy features. She uses her beauty to get a foot into the cartel to gain wealth and power.

A buchona can be the girlfriend or wife of a Mexican cartel member. Typically, the prettier the girl, the more important the gangster, and the higher they sit in the cartel hierarchy. You wouldn’t use the phrase in a face-to-face conversation with a buchona, as they might take offense to it. Having a cartel member’s wife angry at you would not end favorably when her husband finds out.