Did someone just raise their glass and say “Salud” when making their toast to the bride and groom at the wedding? What does it mean? Are they saluting the couple? This post unpacks the meaning and origin of this expression.

The expression “Salud” is a Spanish interjection meaning “health.” It’s a common toast made on special occasions or when drinking with friends. You can use the phrase in many toasts, from celebrating a wedding to someone’s wake or just a casual toast to your health when sipping on a beer with friends at a bar.

The expression is also used to say “bless you” after someone sneezes. You could use it interchangeably with “bless you” in this situation. “Salud” is a common interjection, and it has variations in Spanish, French, and Italian, with the Italian and Spanish versions being the most used in the United States.

“I love you both with all my heart and wish you a prosperous life together. Everyone raise your glasses to the happy couple and join me in a toast. Salud.”

“Salud my fired. We’ve come through a lot together, and no, we’re standing at the top of the heap. Congratulations are in order.”

“I wish you well, my friend. May you have a safe journey back home to Mexico, and give your family my warmest regards when you see them. Salud.”

“I appreciate all you have done for me and my family, my friend. Without you, we would never have managed to find solace in this country. I tip my hat to you, Salud.”

“Here, have another beer. Before we take our first sip, let’s toast to our health. Salud.”

“After hearing all those amazing speeches about you, you must be feeling pretty good right now, and you deserve it. Here’s to you, my friend, Salud.” 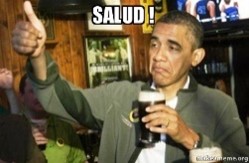 The expression “Salud” originates from the Latin word “salutare.” It spread into European languages, including French and Spanish, and was used in English conversation by the early 1930s. The French word “Salut” appeared a decade earlier in the 1920s.

The Italian version of the saying spread through New York and New Jersey, thanks to Italian-American communities set up in the early 1900s. The version “Salud” became popular in the western United States in the 1930s with the integration of Latin American communities into California and surrounding areas.

Language experts are unsure when the term started to experience popularity. However, many believe that it comes from adopting the word into American film and television. It’s more common for people to use it as a toast rather than bless someone after they sneeze.

Phrases Opposite to Salud

Some people may misspell the word “salut.” However, this is the incorrect spelling of the expression. Using “Salud” as anything other than a blessing or a wish for good health is wrong.

You can use the expression “Salud” when you’re toasting someone. It’s a common replacement for “cheers” when making a toast, especially in Latin American communities and around the southwestern United States.

People of any ethnicity can use the saying as a toast, and they don’t have to have any Spanish heritage. No social stigmata or cultural appropriation applies to the term when people other than those of Spanish descent.