Are you looking for a word to describe a married woman’s lover? You could call them “Sancho” to describe his behavior. This post unpacks the meaning and origin of this expression.

The expression “Sancho” means a man sleeping with a married woman or a woman in a committed relationship. The Sancho is an urban legend, and no one really knows where the saying comes from or when people started using it in this manner.

“Sancho” is a common first name for kings in the first Portuguese dynasty in the 14th century. However, when used in a lighthearted context as a label for someone, it means a man that sneaks around another man’s wife when he is not around.

It’s the same as the old expression of “sleeping with the pool boy” or the gardener. Since immigrants would typically hold these positions in households around California and Texas, using “Sancho” as the scapegoat for the wife’s lover became commonplace in modern language.

For this reason, some “woke” people suggest the term has a racist connotation and theme to it. As a result, you might get some bad feedback when using it online.

“Oh, that guy is her, Sancho. We always see him arrive twenty minutes after the husband leaves for work on Thursdays and Mondays.”

“I had no intention of starting this relationship to become someone’s Sancho. What do you take me for? I’m leaving you, and there’s nothing you can do to stop me.”

“I’m tired of being the Sancho in this relationship. Either you tell your husband you’re leaving him for me, or I’ll confront him about it tomorrow.”

“Emile is my Sancho. He is delightful, and I love playing with him while my husband is away overseas. There’s no harm in it, just simple sex.”

“I think this woman is married. That makes me her Sancho, and I don’t know how comfortable I am with that.”

“What do you think? Should I keep on being this woman’s Sancho, or should I let her go? Sneaking around behind her husband’s back is starting to get to me.”

“I’m fine with being this woman’s Sancho. I don’t have any issues with it. It’s you that has the problem.”

“How can you can that guy “Sancho” if he doesn’t have any Latin-American heritage? Isn’t that racist? And why call him Sancho if that’s not his name?” 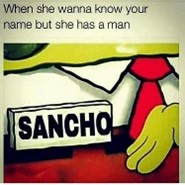 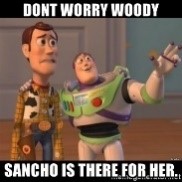 Language experts are unsure when or how the term “Sancho” appeared in English to refer to a married woman’s lover. Some believe it comes from the 1960s when people in wealthy neighborhoods would hire Latin men to handle the garden and housework.

It became an urban legend that bored housewives would sleep with “Sancho,” the pool boy, to get back at their husbands for not paying them enough attention. The term entered media through movies, TV shows, and music, spreading across the United States during the 1980s and 1990s.

Phrases Opposite to Sancho

Using the phrase to describe the outside lover participating in a female homosexual relationship would be incorrect. Sancho is a man’s name, and it wouldn’t fit right when using it in discussions of gay women.

The phrase suits use in verbal conversations and online. “Sancho” is the subject of many online memes regarding the male lover of a man’s wife in a married relationship. The person doesn’t need to be of Latin-American descent, and the term can apply to men of all ethnicities.