Are you looking for a colloquial expression to tell someone there is no way you’re going to do something they request? You could use the Spanish term “no mames” to voice your lack of cooperation. This post unpacks the meaning and origin of this expression.

The expression “no mames” is Mexican-Spanish slang for “no way” or “not a chance.” There is some reference to it having a vulgar meaning, such as ‘blow me,’ or other worse definitions that we won’t repeat here. However, the offensive descriptions are not the general meaning of the term.

The phrase appears in non-formal conversations between friends where one makes an outlandish request, and the other doesn’t want to accept it. The term is uniquely Mexican. If you travel to Europe and say it to Spanish-speaking people in Spain, they won’t understand what you’re referencing.

“What do you mean you want me to handle all that today. No mames, my friend, there’s no way you’re bending me over a barrel because you’re feeling the pressure from management.”

“There is no mames that I’m going to agree with that. All the odds stacked in your favor and me left with all the risk in the deal.”

“Listen, no, mames, I do that for you. I love you like a brother, but you’re asking the impossible with this. Can’t I do anything else for you?”

“I don’t care what she told you. I’m not doing that, no mames, no way, no how, not ever. Just forget about it and tell her to find someone else for your crackpot show.”

“Why are you still persisting with that. No memes I ever even think about doing that for you or anyone else. Just leave it alone.”

“No, mames that you get into the building and secure the football before security finds you. If you get caught, that’s on you.” 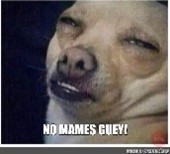 The expression “no mames” is a Mexican-Spanish word meaning “no ways.” The word first appeared in Mexican-Spanish in the early 1990s. If someone asks you to do something you don’t want to do, you could reply with no mames to show them that there is no way they can get you to do what they want.

It’s a definitive statement telling people no. Mames has a root in the Mexican-Spanish verb, “mamar,” which means “to suck.” It may also have some reference to a male body part. So, by telling someone “no mames,” you’re essentially asking them to “bl*w you” or to “go suck it.” As a result, “no mames” might be considered a vulgar reply.

The term spread through Southern and western states as Mexican communities integrated into the Californian lifestyle. Actor Diego Luna brought the phrase to public attention by using it in the Conan O’Brien show in 2013.

Phrases Similar to No Mames

Phrases Opposite to No Mames

Acceptable Ways to Phrase No Mames

You can use the expression “no mames” as a reactionary statement when someone asks you to do something that you don’t want to do. It’s a way of telling them “no way,” and there is no chance that you will do what they request. If you tell someone “no mames,” you’re essentially telling them that they are on their own and don’t want anything to do with them.

It’s a common expression used mostly in Spanish-speaking communities on the West Coast of the United States. No mames is one of the many Spanish colloquial expressions adapted to use in American culture and English.