Are you looking for a way to tell someone that their actions or suggestions are no good? You could tell them “no Bueno” when they ask for your participation or opinion. This post unpacks the meaning and origin of this expression.

The Spanish saying “no Bueno” is common across America, most common in non-Spanish-speaking communities. The expression is grammatically incorrect, and if someone says it to you, they don’t have any understanding of Spanish.

“No Bueno” means “not good” or “no good.” It’s a way of voicing your disapproval or telling someone that you don’t agree with their plans or what they are suggesting.

However, since the phrase is grammatically incorrect, you won’t find Spanish people using it in their community. The correct way to say the term would be “no está bien.” With this saying, the verb “está” means “to be,” in the third person, referring to “it.”

“Oh my goodness, that’s no Bueno. How can you post that online and not expect everyone to come after you? You’re the ultimate troll.”

“That’s no Bueno, my man; I’m sorry to hear that. There’s no way those people can get away with doing that to you. We have to take revenge.”

“What do I think of it? It’s no Bueno, my guy. Just look at how people are reacting to it already. It’s not what we were long for with the campaign results.”

“I told him I’m not going with him no matter how much money it pays. That’s no Bueno for me. I don’t care what he’s offering for the work.”

“Didn’t anyone ever teach you manners? You can just reach onto the table and start grabbing food before saying grace. That’s no Bueno.”

“Everything about this is no Bueno. From the ground up, the entire project is a bust. Let’s get back to the drawing board and develop something practical.” 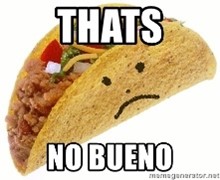 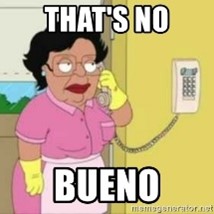 The expression “no Bueno” is a rendition of the Spanish phrase “no está bien.”  Typically, it’s said by other racial groups when they want to express their displeasure with something or avoid a situation. The saying has Latin roots, stemming from the word “Duenos” and appeared sometime in the 11th century.

Language experts are unsure when the phrase entered American English. However, some think it comes from the 70s and 60s and the start of immigration from Mexico. Since the term is not grammatically correct in Spanish, we must assume that it has its roots in white culture.

Phrases Similar to No Bueno

Phrases Opposite to No Bueno

Acceptable Ways to Phrase No Bueno

The phrase suits informal, social use, and it’s a popular meme in chatrooms like 4Chan. You can use “no Bueno” as a reactionary statement to someone when they ask your opinion. You can use it as a reply when your friend asks you if you want to eat at the food truck again today.