Did someone just thank you for helping them out? You could say “de nada” if they’re a Spanish person to let them know it was your pleasure assisting them. This post unpacks the meaning and origin of this expression.

The Spanish term “de nada” translates to “you’re welcome” or “it was nothing.” It’s a saying used after someone thanks you for helping them out. In Spanish, the term usually follows the gratuity, “thank you,” or “Gracias” in Spanish. “De nada” is a suitable reply when trying to be nice to someone after offering assistance.

“De nada” can also mean “no problem” or “it was nothing.” It’s a polite phrase with many applications. You’ll use it when talking to Spanish people or when talking to English-speaking people, as most English speakers in the southwestern United States understand the meaning of the expression.

“Oh, my friend, de nada. It’s no problem, and I’m happy to help where I can. Let me know if you need anything else.”

“De nada, really, it’s no issue at all. Contact us anytime you need help with this sort of thing; it’s what we’re here for, alright?”

“Really, de nada. I can’t accept money for helping out a fellow human being. I’m just glad I was here when it happened, and I could help.”

“De nada, my friend. I don’t expect any monetary reward for helping you out. It’s my pleasure. Take that money and buy yourself a beer. You earned it after a day like this.”

“It’s my pleasure, de nada. There’s nothing I like more in life than helping people out. It’s how I make amends for all the other problems I cause in life.”

“De nada, you’re welcome, my friend. We don’t get many people from your country this far into Mexico. We’re glad we could assist you with what you needed.” 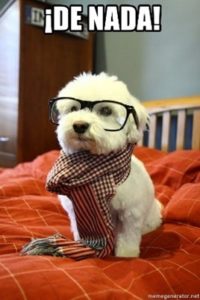 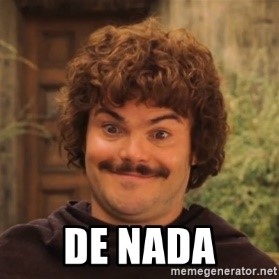 The expression “de nada” originates from the Spanish language, and it also has the same meaning in Portuguese.

However, the introduction of the saying in America comes from the immigration of Mexican and Latin families to the southwestern US, starting in the 1940s.

The first appearance of the saying in print comes from “The American Review: The Magazine of New Writing, Issue 25,” published in 1976. The phrase gained popularity in the United States in the late seventies.

This Latin root is also responsible for terms relating to prenatal, neonatal, and postnatal conditions in women. The word “de” is a Latin adverb meaning “off of, or away from,” or “down from.”

Phrases Opposite to De Nada

Non-Spanish-speaking individuals may use the term “de nada.” However, if you say it to a Spanish-speaking person, they might assume you know Spanish and start talking to you in the language. If you don’t understand what they’re saying, it could be embarrassing.

“De nada” means “no problem” or “you’re welcome” in both Spanish and Portuguese. So, make sure you don’t say de nada after someone says “Obrigado,” or you might have them thinking you can speak Portuguese.

The phrase suits casual use, and it’s a way of telling someone that you’re happy to help. The word is not slang, and most English-speaking people in the United States understand the term’s meaning.