Did someone ask you what you’re doing on ‘Christmas, Adam?’ This post unpacks the meaning and origin of this expression.

The expression ‘Christmas Adam’ doesn’t mean a person. It refers to December 23rd, the day before Christmas eve. It’s a relatively new term, appearing in the last two decades. However, it’s not universally understood outside of the United States.

“I don’t get why Americans call December 23rd’ Christmas Adam.’ It reminds me of that idiot in congress that used ‘Awoman’ instead of ‘Amen.”

“I do all my shopping for the big day on Christmas Adam. The stores are quieter than Christmas eve, and I don’t have to wait as long in queues to check out.’

“I love Christmas Adam. It’s like the jump-off for the holiday season. As soon as it arrives, I feel full of Christmas cheer.”

“Let’s go out to eat on Christmas Adam. I don’t feel like cooking tomorrow, and we deserve a night out before the Xmas season starts.”

“Why do we call December 23rd’ Christmas Adam?’ It’s so ridiculous that I don’t even know what to say about it. It feels wrong.”

“Christmas Adam is tomorrow, and we need to put up the tree and decorate the house before the guests arrive on Christmas eve.”

“Do you know how hard it is to find a turkey on Christmas Adam? Most stores are long sold out, and they won’t be getting new stock till next year.”

“I find Christmas Adam so frustrating. There’s so much to do to prepare for the next three days of the festive season. It always leaves me feeling burned out.”

“I’m going to my family on Christmas Adam, because we’re going on vacation on Christmas eve, and I won’t be around to see them during the holidays.”

“Christmas Adam is the official start to the festive season. Everyone’s off work and feeling the Christmas spirit. Sit back and dream of the feast waiting for your on the big day.” 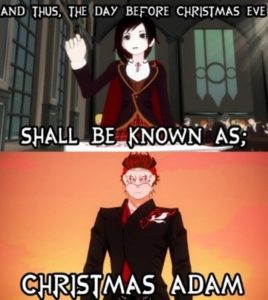 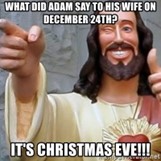 The expression ‘Christmas Adam’ originates from the United States. There is no use for the term outside of the US, as no other countries celebrate December 23rd as ‘Christmas Adam.’ Language experts are unsure when the expression first appears in the English lexicon or who coined the phrase.

However, it’s thought that the term comes from the last decade or so and the rise of the equal rights and diversity movements. A US congressman famously closed a session with ‘Awoman’ instead of ‘Amen’ as a way to create diversity and equal rights, but he only succeeded in making himself look like a fool in front of the world.

Phrases Opposite to Christmas Adam

Using the expression ‘Christmas Adam’ outside of the United States will likely result in people looking at you strangely. It’s not a common phrase in the UK or Europe, and most people won’t understand what you’re referencing.

You can use the phrase ‘Christmas Adam’ to describe the day before Christmas eve (December 23rd). The expression is only commonly used in the United States and doesn’t have widespread adoption around the globe. Christmas Adam is not an official holiday or registered in the calendar as a day of celebration.

You can use ‘Christmas Adam’ in social and professional situations. For instance, you could use it with your colleagues at work to wish them a merry Christmas Adam. Or you could do the same with friends and family. The expression suits verbal exchanges and text-based communications.