Did a British person just say the words, “cor blimey!” After meeting you for the first time? What does this idiomatic expression mean? This post unpacks everything you need to know about the meaning, origin, and use of this expression.

The idiomatic phrase, “cor blimey!” is an exclamation of shock, disbelief, or excrement at another person or their actions. You can also use the term when describing objects and items and how they make you feel.

This British slang is still relatively common in the UK, but it’s fading away with the diminishing British culture in the UK. The original version of the phrase, “God blind me,” referred to the need to be blind because the person could not believe what they were seeing in front of them.

The phrase would also feature as a way to tell someone that they were wearing a mismatched outfit. However, many people have a problem using God’s name in vain.

To remove the blasphemy from the phrase, people changed it from “God blind me” to “cor blimey.” People seemed less offended by this version, and the term experienced widespread adoption across the UK.

“Hey Jeff, will you look at that? Cor blimey, I’ve never seen anything like it.”

“Cor blimey, that’s a heck of a story, Priscilla.”

Mike: “Cor blimey John, we can’t keep doing this to ourselves. Are you trying to give us a heart attack?” 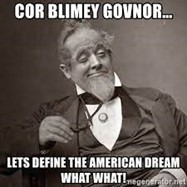 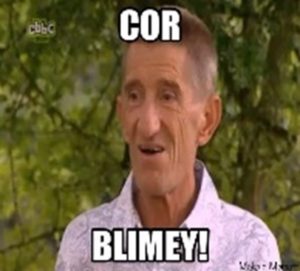 The origin of the idiom, “Cor blimey!” comes from the first print record issued in the “Dictionary of Slang and Jargons” by Barrere and Leland. The dictionary had its first print in 1886. However, the initial use of the phrase was “gaw blimey,” featuring in the novel “A Child of the Jago” by Arthur Morrison.

James Joyce would provide the first use of the modern iteration of the phrase in his book, “Ulysses.” The book mentioned the term “God blimey.” The phrase underwent alteration to “cor blimey,” as a way to remove the blasphemy from the phrase and make it more appealable to the masses.

Cor blimey! It was a popular phrase until around the early nineties. It would feature in many publications surrounding youth and adult culture.

For instance, the term would often feature in the “Beano” comic books and other youth cultures. There is also some evidence that the alteration of “God blind me” to “cor blimey” could come from the influence of the Cockney dialect of English spoken around London.

Today, the phrase has limited use outside of the UK. It doesn’t feature in US culture, so Americans may not know what the saying means if they watch TV or a movie and hear the character say the phrase. British people use the term, and many young and older adults use it as everyday language.

Phrases Opposite to Cor Blimey

“Cor blimey” is a uniquely British saying, and you won’t find people outside of the UK using the term very often. Most Americans won’t understand the meaning or application of the idiomatic phrase in conversation.

You can use the phrase “cor blimey” when you want to show surprise or exclamation at something someone says, an action they take, or an object. Many people outside of the United Kingdom won’t understand the phrase’s meaning.