Did your ‘dawg’ just invite you to their place to chill?

The expression ‘dawg’ is a term of endearment used between friends. Typically, it’s hip-hop slang used in cities across America. If someone is your ’dawg,’ they’re someone you know or a community member.

You usually have a good relationship with your ‘dawgs’ and the occasional ‘beef’ between you.

A ‘dawg’ is someone close to you, but it doesn’t mean you trust them. It means that you view them on the same level as you and view each other as equals in your social circle.

“What’s up, my dawg? How have you been? I haven’t seen you in a minute, and I was starting to wonder where you are. I’m glad we ran into each other like this.”

“You know me, dawg, Uncle Joey has your back on a Monday morning. We’re coming at you with another podcast brought to you by our sponsors.”

“Yo, dawg. Where are you going over there? You better take yourself to the store to get me a bottle of that OE, son. Don’t make me come after you.”

“That boy right there is my dawg. We grew up together in the projects, and we’ll die for each other. That’s how we do out here, and ain’t nothing changed, ya heard?”

“Listen, you’re my dawg and everything, but I really need to get this job. I’m sorry, I can’t hang around y’all right now, or they’ll put me back in prison.” 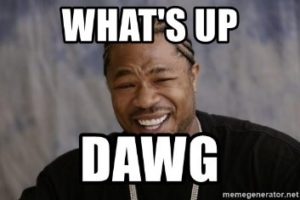 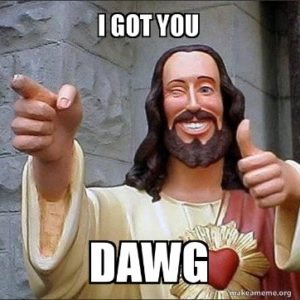 The expression ‘dawg’ originates from street slang in the United States in the early nineties. Some language experts point out it likely has its roots in the 1970s animated TV show ‘Deputy Dawg.’ However, there is no evidence to support that claim.

Instead, the hip-hop community is more likely to be the originator of the term. It’s a term of endearment said between friends in urban communities in cities like NYC and LA. However, there is some dispute on the spelling and pronunciation of the word.

Rappers like Snoop Dogg from LA and NYC would spell the word ‘dogg,’ while rappers from the south would use the ‘dawg’ spelling and pronunciation, drawing out the ‘w’ in the word.

The phrase is still popular in hip-hop as a reference to your friend. However, the trend of people outside the hip-hop community using the term is dying out in the 2020s.

Phrases Opposite to Dawg

The term ‘dawg’ refers to your friend. While it can be a term of endearment for your best friend, it can describe anyone close to you.

However, it’s a masculine term, and men use it with each other. Typically, you won’t find women calling each other their ‘dawgs.’ While dawg is an accepted spelling of the term, it’s more common for people to use the alternate version, ‘dogg.’

You can use the term ‘dawg’ when referring to people you know or respect. It suits social situations where you’re talking to people close to you or discussing your best friends with someone else. It’s a somewhat dated term, but it’s still used today. If you call someone your ‘dawg,’ you’re calling them your friend.

Usually, men and boys use the term when talking to their male friends. If someone is your dawg, they are as loyal as a dog to you, and you have the same respect for them. The term is suitable for verbal and text communications.