Did a friend say you look stressed and ask if you’re ‘coping‘ at work? This post unpacks the meaning and origin of the expression.

The expression ‘coping‘ means that you’re dealing with a stressful situation, but you’re not in over your head. A coping mechanism is a self-delusion a person clings to that helps them endure the despair and hopelessness of their existence.

However, the term has a different meaning online. Gamers will post the expression in chats after they notice a user complaining about losing. They will ask if they’re ‘coping‘ as a troll to entice the user into a gamer rage.

‘Coping‘ is similar to the term ‘copium,’ which is a popular meme on message boards like 4Chan and Reddit. However, ‘coping‘ is the more common term in gaming chats. It’s also similar to the expressions ‘deal with it’ and ‘cry about it,’ which are popular gaming terms used for trolling losers.

“Are you okay there, buddy? Are you coping with taking that L? That’s too bad; maybe next time.”

“How are you coping with having the kids at home all day from school? It looks like it will be a long summer for you.”

“We’re coping with the situation. It’s challenging, but we have the team we need to do the job. Give us an hour, and we’ll have things under control.”

“I don’t know how you’re coping with this. It’s a really terrible story, and I would be going out of my mind. If you ever need a shoulder to cry on, please, give me a call.”

“How are you coping with the stress of the situation? It must be hard dealing with the loss of a loved one.”

“I don’t think you’re coping. Maybe it’s time to log out of the chat and go touch grass? 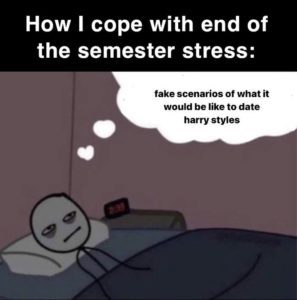 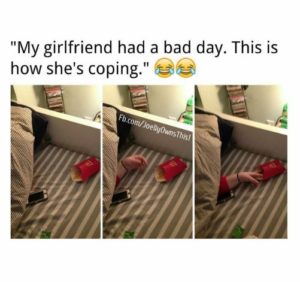 The expression ‘coping’ has unknown origins in the English language. It’s a relatively old term in English and was in use well before the start of the 1900s.

However, the modern use of the expression referring to the gaming troll first appeared in the Urban Dictionary in August 2019. It’s somewhat of a rendition of the ‘copium’ meme featuring ‘Pepe the Frog.’

The phrase became something of a viral response on gaming chat boards, such as Twitch, as well as message boards like Reddit and 4Chan.

Phrases Opposite to Coping

Some people may confuse ‘coping’ with ‘copping,’ meaning to acquire something. As in, ‘I was copping this album at the record store when I realized I left my wallet at home.’ Using it for this purpose is incorrect.

You can use ‘coping’ in social and professional situations. A home, you could ask your partner if they are coping with staying home with the kids all day during the summer. You could ask a colleague if they’re coping with the new project at work. ‘Coping’ also suits use in online gaming forums. You can use it to troll gamers who lose and start typing unhinged comments in the chat.

If you’re ‘coping,’ it means you’re dealing with a situation in life that increases your stress and anxiety. You can use coping to show empathy for the person or to frustrate them further, depending on the context of the conversation or chat. People who are into board riding sports may use ‘coping’ to describe the kip of a ramp or wave.