What is the meaning of “end all be all?” what are people talking about when they use this idiomatic phrase? This post unpacks everything you need to know about the meaning, origin, and use of this expression.

End All be All Meaning

The meaning of the phrase “end all be all” refers to an extreme situation that has a definitive outcome that could change the direction of something, whether that’s a person’s life or their lunch.

“End all be all” can also refer to the best part of something, such as the peppers in the omelet example above. You’ll use the phrase when you say that something is “coming to a head” and requires immediate decisions and actions to move things forward.

In some cases, people may use it as a hyperbole statement, exaggerating a conversation or engagement outcome. However, if you hear people using the term, it’s usually in a case of emergency, and the expected result is not far away.

End All be All Example Usage

“When your grilling a steak, the correct searing of the meat is the end all be all of how the steak holds its juices and flavor.”

The upcoming exam is the end all be all of your college careers. It means the difference between working for a leading firm like Goldman or not getting hired at all.”

“Impressing your girlfriend’s parents is the end all be all for your relationship. If they don’t like you, she’s likely to leave you.”

“As Khabib put the bulldog choke on Connor, it was the end all be all moment of the fight.”

“The manager told me that my sales figures this month are the end all be all of me staying at the company. I hope I don’t have to find a new job.” 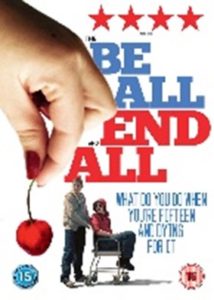 End All be All Origin

The origin of “end all be all” comes from William Shakespeare’s 1605 play, “Macbeth.” Shakespeare uses the phrase in the following format.

“If it were done when ’tis done, then’ twere well it were done quickly: if the assassination could trammel up the consequence, and catch, with his surcease, success; that but this blow might be the be-all and end-all here.”

The phrase inferred the same meaning as it has today, and it hasn’t changed in the last 400-years. It’s one of the few idiomatic phrases from this era that remains in its original format.

Phrases Similar to End All be All

Phrases Opposite to End All be All

Ways People May Say End All be All Incorrectly

Using the phrase to describe the end of something is the incorrect use of the term. For instance, you wouldn’t use it to describe the final days of a vacation or the last bite of a meal.

Acceptable Ways to Phrase End All be All

You can use “end all be all” when describing a deciding factor in your life. Whether it’s a relationship or cooking a meal, this phrase has several applications in language. It suits professional and social use, and most people will understand what you are saying when using the term. Some people may use “end all be all” as hyperbole to their life situation.