Did one of the characters on the Sopranos call a woman a “goomar?” Are you wondering what it means? This post unpacks the meaning and origin of this expression.

The expression “goomar” is an American-Italian word for “mistress” or “side-piece.” It’s a phrase appearing in many Italian-American gangster movies like “Casino,” “Goodfellas,” and others. A “goomar” is a mobster’s girlfriend, and she serves the mobster’s beck and calls. She must please him sexually, massage him, and cook for him.

She waits on him hand and foot, and in turn, the mobster rewards her by paying her bills and buying her jewelry and clothes. Mobsters would often have separate lives from their wives, where they would invite their goomars to bars and let them mingle with each other.

The goomar would know that she was the mobster’s side-piece, and she would never interrupt or interfere with the mobster’s family or visit him at home or at work. If the goomar did get out of place, the mobster would usually threaten her with physical violence. He would leave her destitute and on the street as punishment.

“Tommy was going out with his goomar tonight and told me to keep an eye on his wife. I have to call him if I see her leave the house.”

“Friday night was for the wives, but Saturdays was for the girlfriends. I had Carol, my goomar, with me. She was all over me every chance she could get.”

“If you’re going to your goomar, then stay over there. I don’t want you back in this house ever again! Do you hear me?”

“If an Italian-American guy tells you he’s going to see his goomar, it means he’s visiting his girlfriend. The bad news is he has a wife at home.”

“How is a man supposed to stay faithful to one woman his entire life? If it weren’t for my goomars, I would have left my wife years ago.”

“Listen, you can have a goomar, but you have to keep it on the low. If the wife finds out, you’ll end up in big trouble, but she never has to know.” 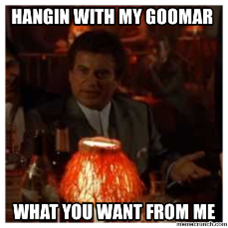 The Italian expression “goomar” originates from the old Italian language as a colloquialism for your side-piece or mistress. It comes from the Italian word “comare,” which refers to a person’s godmother or someone that takes care of them physically and emotionally.

The word “goomar entered mainstream use in English with the introduction of Italian-American gangster films by directors like Martin Scorsese and his 1990 crime drama classic. “Goodfellas.” The neologism also gained popularity through the hit 90s TV series “The Sopranos.”

The show introduced many Italian-American terms to its audience. Since the show was popular, many of those neologisms have stuck in modern English use. Otjer examples of terms from the Sopranos adopted into English include “gabagool” and “Goomba.”

Phrases Opposite to Goomar

Some people may spell the word as “Gumar.” However, the correct colloquial spelling is “Goomar.” It’s also incorrect to use the term to describe a person’s girlfriend or wife; it only refers to a man’s mistress.

It’s not suitable to describe a homosexual relationship as the stereotype of the Italian-American gangster is mostly against gay marriage and gay rights.

You can use the phrase “goomar” when referring to a man’s side-piece or mistress. The term is Italian, and it comes from the American-Italian mob based in New York. You could use the phrase in social situations where you want to talk about someone having an affair and refer to his mistress.

Typically, only Italian-Americans will use this word. However, the integration of neologisms from TV shows like “The Sopranos” means that many people understand the word’s meaning, especially on the east coast of the United States.