Did someone just tell you to take the news with “a grain of salt? This post unpacks the meaning and origin of this expression.

If someone tells you to “take it with a grain of salt,” they are telling you to be hesitant about what you believe. It’s an expression suggesting that you should remain skeptical about what people are telling you because it might not be the truth, or they could be misleading you.

“The Federal Reserve says that the inflationary data is weakening, and we should have a problem with it this year, but take that with a grain of salt.”

Maggie told me that she’s going to make it here on time, but take that with a grain of salt because she’s always late.”

“The coach told me that I have what it takes to make the NBA. Unfortunately, he doesn’t know how to build a team, so I take what he has to say with a grain of salt.”

“The MLM founder told us we’ll all be rich if we just get people to sign up. I took it with a grain of salt because it sounds like a pyramid scheme to me.” 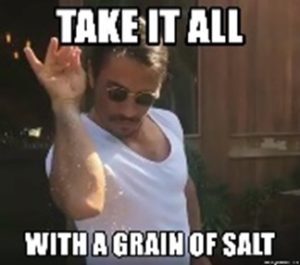 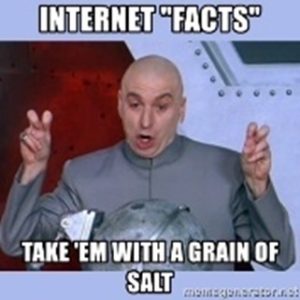 “be taken fasting, plus a grain of salt.”

Some people suggest that the original use of the word was to describe the act of taking poison to commit suicide. After the defeat of the monarchy of Mithridates, the new ruler, Gnaeus Pompeius, found a recipe for the antidote to the poison in his private chambers, which read as the following.

“Take two dried walnuts, two figs, and twenty leaves of rue; pound them all together, with the addition of a grain of salt; if a person takes this mixture fasting, he will be proof against all poisons for that day.”

The text suggests that the addition of salt acts as the catalyst to activate the antidotes properties.

However, the phrase would take many centuries to evolve into use in the English language, and the first use of the term comes from scholars studying the works of Pliny. “A grain of salt” would eventually gain popularity for use in the 17th century, and an example is the use of the expression in John Trapp’s Commentary on the Bible in 1647, which reads as follows.

“This is to be taken with a grain of salt.”

Phrases Similar to Grain of Salt

Phrases Opposite to Grain of Salt

Some people use the phrase “grain of salt” to describe salt. They may use it to say they only want a little salt for their food. The saying has nothing to do with salt, and using it in this manner is the incorrect use of the phrase.

You can use “grain of salt” when you’re trying to emphasize that you should avoid taking someone seriously or view what they say with skepticism. It’s a way of telling people to hold off on making an assumption or conclusion on something without having the full story or picture of the situation. In professional cases, you can use the phrase to describe colleagues, management, or customers’ actions or words, and you can use it in social situations to warn family or friends against believing everything they hear.