Did a friend just tell you he’s going to quit his job and ‘walk the world like Kane in Kung Fu?’ You could say he has aspirations to be a ‘hobo.’

The expression ‘hobo’ refers to a person that travels the country without a home base or a stable means of income. Some people may consider a ‘hobo’ a bum, but there is a supposed difference. A hobo is homeless by choice, and they travel the country looking for work. They usually look after themselves.

Bums are forced into homelessness, either by financial mishaps or addiction. They don’t have any inclination to work and prefer avoiding it if possible and they don’t care about their appearance.

“I watched that guy ‘Shiey’ on YouTube the other day. He says he’s a modern hobo. He moves from town to town, checking out crazy climbs and bunkers.”

“If someone is a hobo, they travel from city to city looking for work and a better life for themselves. They are homeless by choice, and they like the traveling lifestyle.”

“I saw a hobo by the park the other day, but now he’s gone. He must have moved on to another city and left this one behind.”

“Why do you call him a hobo, but Tom calls him a bum? What’s the difference? Aren’t they both in dire circumstances?”

“I’m going to travel the world and become a hobo. I’ll just spend the next few years train surfing across Europe. I think it’s going to be a lot of fun.” 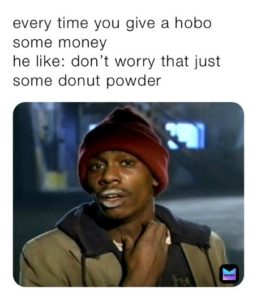 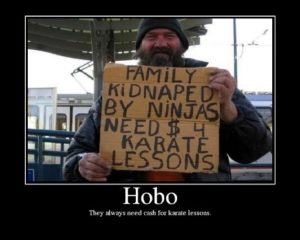 The expression ‘hobo’ has unknown origins. However, some language experts believe the term comes from American English in the late 1800s. Some believe the word comes from the Western or Northwestern United States, sometime in 1888 or 1889.

Todd DePastino, a historical author, states the term derives from ‘hoe-boy,’ meaning a ‘farmhand.’ The author, Bill Bryson, believes the word may have origins in the age-old railroad greeting ‘Ho, beau!’ which is an abbreviation of ‘homeward bound.’

“Tramps and hobos are commonly lumped together, but in their own sight, they are sharply differentiated.”

Phrases Opposite to Hobo

A hobo is different from a ‘bum.’ A bum is down on his lunch and homeless, but it isn’t their choice. They were forced into a life on the streets. A hobo is a person that travels the country, visiting destinations while requiring minimal resources to travel and survive. Hobos are homeless by choice because they like living on the road.

You can use the word ‘hobo’ to describe a traveling person that looks like they don’t have much financial stability in their life. A hobo is homeless by decision, and while some may panhandle for money, many of them work odd jobs along the way during their travels. A hobo is someone that doesn’t have the responsibilities in life that make the average person settle down.

You can use the term ‘hobo’ to describe a person that lives a carefree life. They don’t have a stable job or income, and they ‘go with the wind.’ They might crash on friends’ couches or travel the countryside, sleeping in tents or hammocks they take from town to town.