Are you looking for a confirmation statement to let your friends know they can come over for a visit? You could reply to their text with “ight” to let them know you’re home, and they can come past. This post unpacks the meaning and origin of this expression.

The expression “ight” confirms that you understand what another person old you. It’s a shortened version of “alright” or “alright then.” The phrase is a hip-hop alteration of “alright,” and it has the same meaning.

It’s used in casual conversation to let the other person know that you agree with them. Depending on the tone of the word, it could mean that you completely agree or you’re reluctantly agreeing with someone’s request.

“Oh, ight, I get it. Let’s meet up this afternoon then, and we can discuss what you mean when you call me that.”

“Ight, have it your way then. I’m tired of arguing with you. If that’s the way you want things, so be it. I’ve had enough of this.”

“Ight bro, we can make that happen. Swing past my place and pick me up. It’s around 15-minutes to In-and-Out from my place.”

“Ight, I feel you. Let’s do this thing. They won’t even know what hit them until we’re long gone and over state lines.”

“Ight, I got you, brother. Don’t be afraid to push yourself to your limits. We’re here to help if anything goes wrong.”

“Ight, I’ll head down to the store and get some milk and the paper. Do you want anything else?”

“Ight,. Let’s not take things too far with this. We’re all in agreement, and let’s keep it that way.”

“Ight, I’m ready to do this. Let’s make it happen already. What are you guys waiting for? Let’s get on with things.” 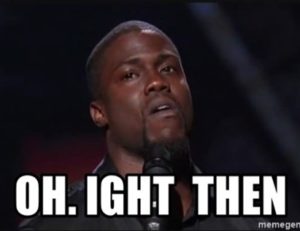 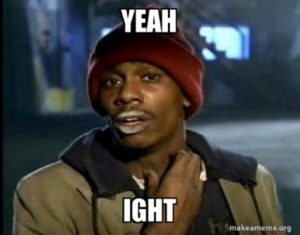 The expression “ight” originates from the hip hop slang pronunciation of the word “alright.” Rappers and gang members would shorten the word “Alright” to “aight” as a more phonetic way to pronounce the word. The pronunciation caught on in mainstream culture, with youth demographics adding it to their vocabulary.

The word hit mainstream media in the 1990s, with rapper Doug E. Fresh being the first to use it in his 1993 hit single, “I-ight.” The phrase experienced growth during the 2010s, thanks to the Spongbob Squarepants “Ight, Ima head out” meme circulating in chatrooms like 4Chan and Reddit and on streaming platforms like Twitch.

The word spread through popular culture, and it’s common to hear it when listening to rap lyrics or podcasts involving rap artists.

Phrases Opposite to Ight

Some people may spell “ight” as “aight,”” which is the previous form of the expression. However, text culture changes at a rapid pace. So using” aight” is technically incorrect as it’s replaced in text communications by the shorter version, “ight.”

When replying to someone’s request, you can use the term “ight” as a confirmation statement. It also serves as a way to express your agreement with the situation and that you’ll deal with it as the situation unfolds. The phrase suits social use in text and verbal communications.

You could use it online to voice your agreement with someone or ask for consensus from people in the chat. You could use it in verbal conversations when your friends tell you they are coming over to visit. It’s a way of saying that you agree with what you hear.

However, it can sometimes have a negative connotation, meaning that you reluctantly agree with something someone is requesting from you.