Are you looking for a word to describe someone that looks like a gang member? You could call them a “vato” to bring people’s attention to their shady looks and behavior. This post unpacks the meaning and origin of this expression.

The expression “vato” refers to a person displaying shady or criminal behavior. It’s a Spanish term originating from the language used to label gang members and informants. However, the modern meaning of vato is “that guy,” “pal,” or “buddy.”

You can call someone you know a “vato” or someone you’ve never met before “vato.” The phrase usually has a negative connotation, and you wouldn’t use it with friends unless you want to describe them as a “little crazy.” You wouldn’t use the word around your family, and calling your brother a “vato” in front of your mother, especially if you have Spanish parents, would be disrespectful. It only suits slang use between friends.

“Look at this vato right here, homes. He must think he owns this spot. Why is this fool tagging over my layup? Doesn’t he know we’re loco?”

“I think we need to teach this vato a lesson homes. You can’t go around disrespecting people like that and think you’ll get away with it.”

“Hey, vato, what are you doing around here? Don’t you know it’s not safe for you to be out in this neighborhood at this time of night??

“Why don’t you give me the time, vato? No, give me your watch; I’m not interested in the time.”

“This vato over here thought he was just going to walk away from all of this, homes. There’s no way we’re letting you out of our sight before the cops show up.”

“Hey, Vato. What’s the deal with your car, man? It looks like you need to get a new exhaust, homes. That one makes too much noise.”

“Okay, vato. If you want to give it a try, no problem, be my guest. Don’t say I didn’t tell you so when it all comes back to bite you.” 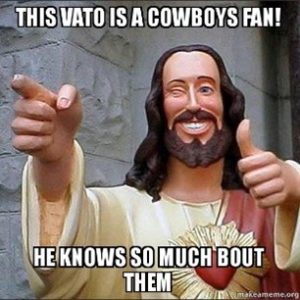 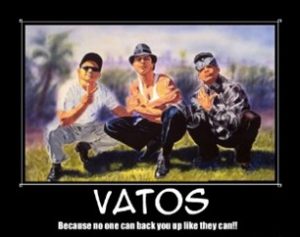 The expression “vato” originates from the introduction of Spanish terms into American culture in the 1980s and 1990s. “Vato” is a Spanish term originally referring to an informant or snitch. However, as the decades passed, the word changed its meaning to “buddy” or “pal.” Vato can describe someone you know or someone you have never met.

Vato started as a shortening of the Spanish word “chivito,” and there is a strong connection between the word and gang life. Many people still use “vato” to refer to someone that looks like they are a criminal or someone conducting a criminal or gang-related activity.

Phrases Opposite to Vato

The term “vato” is uniquely male, and you can’t use it to describe girls or women. The word “vata” has the same meaning and represents a woman. Some people may also confuse “vato” with “bato.”

The term is unique to the Latin-American language, and it’s often used to describe someone with a criminal background or someone that appears gang-affiliated. Calling yourself a “Vatos Locos” means that you’re a crazy guy, probably a gang member.