Are you looking for a way to say you’re enjoying life or life is beautiful? Why not be classy and use the French term “La Vie en Rose” to describe how you feel? This post unpacks the meaning and origin of this expression.

The expression “La Vie en Rose” means “life in rosy hues” or “life is rosy.” It’s similar to the saying “Seeing life through rose-tinted glasses” It means that you see the good in situations, even when they are bad.

Instead of dwelling on the tragedy around you, you choose to see the positive side of things and the good that can come out of the situation. “La Vie en Rose” means that something bad happened to you previously, but you choose to focus on how you can see the good in the situation instead of wallowing in sorrow.

“You know, there might be war in some parts of the world, and we’re experiencing the worst pandemic in history and an economic slowdown, but sometimes you have to admire the beauty in the world and block out the bad. ‘La vie en rose.’”

“Life has a way of surprising me from time to time. It never ceases to amaze me how good things can arise from bad situations. ‘La vie en rose’”

“Sometimes, when I feel like my life is spinning out of control, I sit down and try to remember what I’m grateful for in my life. I always feel better in minutes after that exercise. ‘la vie en rose.’”

“There’s no reason to be down on life and the possibilities it brings you. Remember, things can turn around at any moment. Put yourself in a better headspace, and you’ll soon realize “La vie en rose.’” 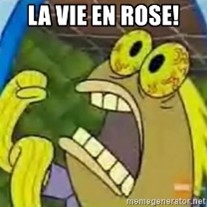 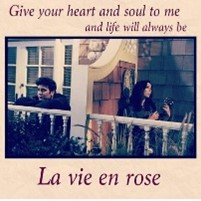 The expression “la vie en rose” originates from one of the most famous French songs in modern history. Written by Édith Piaf in 1945 and released in 1947, “La vie en Rose,” featured composers Marguerite Monnot and Louis Guglielmi (Louiguy).

The song had the original title of “Les choses en rose,” which means “things in pink.” However, Marianne Michel modified it for a universal appeal. The song was one of the biggest hits in the post-World War II era and an ode to those who suffered during the war’s terrible times.

Many artists covered “La Vie en Rose” in the following decades. Some of the notable covers include an early version by Harry James in 1950 and Bing Crosby in 1953 for his album “Le Bing: Song Hits of Paris.”

There are also versions by Grace Jones in 1977, which also reached status as an international hit. There’s also another 1977 cover by Bette Midler, and Donn Summer covered it in 1993. The most successful modern covers of the song come from Lady Gaga in 2018 and Lucy Dacus in 2019.

Since “la vie en rose” is a French term, some people that don’t speak or understand French might not know what you’re saying. Using the expression to describe the beauty in a rose is incorrect. It means that “life is rosy,” or you see the world through rose-tinted glasses.

You can use the expression “la vie en rose” when you want to say “life is rosy.” It’s a French substitute for the saying, and it has an audibly attractive pronunciation that rolls off the tongue. The word is well-known throughout the western world and in French-speaking nations.

In social situations, you can use the phrase to tell people that everything is going well in your life and you don’t have any stress or worries. It’s a way of telling people that life is beautiful and you’re enjoying every minute of it.