Did someone just say “me gusta” to you are looking at something you’re doing? What are they talking about, and what does the expression mean? This post unpacks the meaning and origin of this expression?

The expression “me gusta” translates from Spanish to “I like it.” It’s a way of voicing your approval for something. It’s common for the saying to appear in spoken conversation, and it’s also a popular internet meme. The meaning of the saying in English conversation is to show you like something someone else is doing, and they should keep it up.

The “me gusta” “Rage Face” meme features a crude drawing of a head with a scrunched-up face, bloodshot eyes, and pursed lips. The Me Gusta meme expresses pleasure for awkward or uncomfortable situations. The meme is common in online chatrooms and message boards like Reddit and 4Chan.

“Me, Gusta, that looks fantastic. You did a really good job, kids. I think I’m going to stick this on the fridge.”

“I think it looks awesome. Me Gusta. I love the way it makes me feel like a kid again. You have a real talent for painting.”

“The meal was delicious. I love how you combine the flavors to create a unique taste for the dish. Me Gusta.”

“Me, Gusta. We can use that idea for the project, and it will work. Let me run it past the boss, but I think you have a winner there.”

“Me Gusta, gracias. I appreciate you taking the time to put this together. Lord knows it must have taken you hours.”

“That wasn’t the right thing to do. Me Gusta. I can appreciate the way you took the initiative, even if it didn’t work out well.” 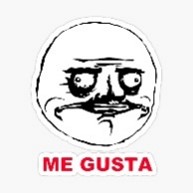 The origin of “me gusta” comes from the Spanish language. It integrated into everyday conversation in the southwestern United States after the influx of Mexican and Latin Immigration in the 90s and early 2000s.

However, the biggest use for “me gusta” in English is online. “Me Gusta” is a “rage face” used in “Rage Comics.” Rage comics features a series of poorly-drawn cartoons. The internet message board, 4Chan, propelled the “Rage Faces” to stardom in 2008 by using the Rage Faces as memes. One of the more popular Rage Faces is the “Me Gusta.”

The Reddit user “Insert” was the artist responsible for drawing the original Rage Face and Me Gusta memes before posting them on 4Chan. The faces became a popular way to “troll” people on social media, and there was a surge in the use of Rage Face memes and the Me Gusta meme after 2010, during the rise of the social justice movement.

Phrases Similar to Me Gusta

Phrases Opposite to Me Gusta

Me Gusta is a Spanish saying, so you would use it around Spanish-speaking people. Some people spell the phrase “mea” gusto, which is incorrect. When using the expression online, it’s more common to post it as a meme or emote of a rage face than spell it out.

Acceptable Ways to Phrase Me Gusta

You can say “me gusta” when you approve of something or you want to say you like it. The phrase suits social and professional use. You could use it at work to tell an employee that you like the results of an account they’re working on. Or you could use it at home to tell your kids you like their arts and crafts project.

Me Gusta has use of online and offline communications. Online, it serves as a meme to voice your approval of other people’s posts in chatrooms, forums, and message boards. It has the same use offline, but you’ll verbally say the phrased instead of posting a meme online.