Are you looking for a word to describe the youngest member of a K-pop band? You could say they are a “maknae.” This post unpacks the meaning and origin of this expression.

The expression “Maknae” is a Korean word translating to “youngest brother.” However, someone doesn’t have to be related to you to call them a “maknae.” In Korean social hierarchies, anyone younger than you would be a “maknae.”

However, the most common use of the word “maknae” in modern language is for describing the youngest member of a K-pop band. The member will have the most boyish looks in the group, and they are typically the member that the youngest girls go crazy for in the videos.

A “maknae” can also refer to the youngest person in a social group. They will be the youngster that looks up to all the older boys in their circle of friends or acquaintances.

“Look at him on the right. You can see he is the maknae of the group. He looks three years younger than everyone else, right?”

“Maknae is a Korean term describing the youngest member of a K-pop band. They have the most boyish features of all the members, and the girls go crazy for him.”

“Have you ever been to a K-pop concert? My daughter loves those bands, and she goes all the time. She always has a thing for the maknae of the group.”

“As the group’s maknae, you rely on the older guys to do the hard work while you just follow in their footsteps.”

“We need to find a maknae for the group right now if we want the label to sign us. If we don’t, we will not have the full lineup they expect from us, and we won’t get the deal.”

“Look at that maknae. What a twink. These K-pop bands make me laugh at how feminine the guys look. It’s no wonder the girls go crazy for them.”

“That maknae looks so delicate that he might break into pieces if you breathe on him hard. He must weigh like 40 pounds.” 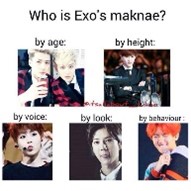 The expression “maknae” originates from the Korean language. It has the pronunciation of “mang-nae” and translates to “youngest child.” Korean households will use it to describe the youngest male member of the family. Kids in school will also use the phrase to address other kids younger than them in their class or school.

Like many other Asian cultures, Korean culture has a social hierarchy. There are names used as unofficial titles for addressing people older or younger than you, based on their social standing and place in society.

“Mankae” became a popular term for describing the youngest member of a “K-pop” band in the 2000s. The first appearance of the expression in the Urban Dictionary in reference to a K-pop band member was in 2008.

Phrases Opposite to Maknae

Maknae is a Korean word, and it’s common for people that don’t speak Korean to mispronounce or misspell the word. There is limited use for the word outside Korea, other than on message boards online and in internet memes describing young male K-pop stars.

You can use the word “maknae” to describe the youngest member of a group or organization. The group could be your colleagues at work, the members of a music band, or your group of friends that you hang out with online or in real life.

The phrase applies to groups of teenage boys, usually of Korean descent. The maknae in the group usually has boyish features and stands out as the youngest member. While the word means the youngest member of a K-pop band, it can also apply to many other groups and associations where the members are in their teens.