Did your parents ever sing you nursery rhymes? If so, you probably heard the popular “pop goes the weasel” rhyme throughout your youth. This post unpacks the meaning and origin of this popular kids’ rhyme.

“Pop goes the weasel” is the name of a popular children’s rhyme. The original version of the song from the 1850s remains to this day, and it’s a common rhyme to surprising and exciting young children, making them smile and laugh.

The original version of the song is as follows.

“Up and down the City Road

In and out the Eagle

That’s the way the money goes

There is plenty of confusion around the meaning of this rhyme. However, some people suggest it was a popular song sung in pubs in the late 1800s.

The song mentions the Eagle Tavern’s pub near the City Road in London. Therefore, we assume that the song must have something to do with drinking or drinking behavior.

Recent renditions of the use of the lyric show it has a use in describing a financial loss. For instance, if you were to blow up your trading account, you could use the phrase to describe the sudden and abrupt loss of your funds.

“Jerry was in the trade for over an hour and got up from his seat to go to the bathroom right as the market crashed. One minute he was riding high, then, pop goes the weasel, and he’s down 40% on his portfolio for the year.”

“Money, it’s funny, isn’t it? One day it here, then pop goes the weasel, and it’s like you never had any.”

“One day, you’re on top, then pop goes the weasel, and you’re in the gutter.”

“You surprised me there, Marv. I’m looking around one minute, and then pop goes the weasel. You come out of nowhere.” 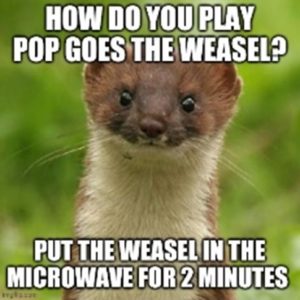 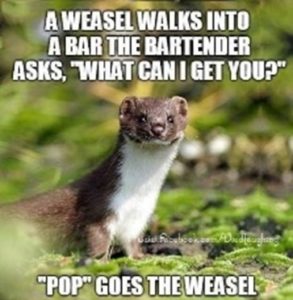 The origin of the rhyme “pop, goes the weasel” goes back to the 18th century. It also mentions the Eagle tavern on City Road, which closed in 1825, undergoing renovations till its reopening in 1901. “Pop Goes The Weasel” is also the name of a boat competing in the Durham Regatta in 1852.

In 1852, “Pop Goes The Weasel” was a “highly fashionable Dance,” introduced at her Majesty’s and the Nobility’s private soirees.” The British Library has an early publication of the phrase describing a dance performed at Her Majesty’s & The Nobilities Balls.”

The song has a familiar tune to the rhyme used today, but only uses the words, “pop, goes the weasel.”

Phrases Opposite to Pop Goes the Weasel

The rhyme “pop goes the weasel” doesn’t have anything to do with shooting people or deflowering virgins. The term is a nursery rhyme adapted to mean something surprising. Using this phrase to describe violence or sexual endeavors would be contrary to its original inception as a nursery rhyme for kids.

“Pop goes the weasel” is suitable for use in conversations where you’re trying to express a surprise event, usually financial or social in nature. For instance, you could use it to describe a sudden financial loss in the markets or someone getting caught for market manipulation. Another similar phrase for this would be “the jig is up.”

However, the biggest use of the phrase comes from the nursery rhyme community, where it’s still a popular rhyme British parents say to their children.