Are you with friends, and one of them asks if you want to smoke some ‘oui’d?’ What are they talking about? This post unpacks everything you need to know about the meaning and origin of this expression.

The expression ‘oui’d’ means ‘cannabis.’ It’s not an official French word, but it’s a slang term many Canadians, particularly French-speaking Canadians, use to describe cannabis. Typically, people refer to smoking cannabis ‘buds’ or ‘flower’ when they talk about ‘oui’d.’

However, ‘oui’d’ can reference all cannabis products, from flower and concentrates to edibles. The slang is a playful reference to the French word ‘oui,’ which means ‘yes’’ but sounds like ‘wee.’ Therefore, the addition of the ‘d’ on the end of ‘oui’ has a phonetic presentation as ‘weed.’

You can use ‘oui’d’ as a replacement for weed, cannabis, marijuana, joints, blunts, bongs, or anything to do with consuming cannabis. It’s a common reference to cannabis, and most users will realize what you’re referencing even if they have never heard the term before.

“You bro, you going to the dispensary to cop some oui’d? Get me some of that ‘cereal milk,’ that stuff is fire, bruh.’

“The oui’d my neighbor grows is the strongest stuff you’ll ever have. It locks me to the couch for hours.’

“My cousin is Canadian, and he keeps calling weed ‘oui’d.’ I think it’s kinda cool, and I’m gonna start using it too.”

“The oui’d in Canada is proper strong. If you’re not experienced, it will knock you out, so be careful with it.”

“I have the best oui’d in Toronto. Give me a call, and I’ll sell you an eighth as a sample when you’re in town.” 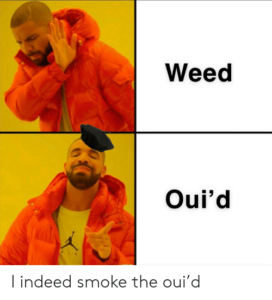 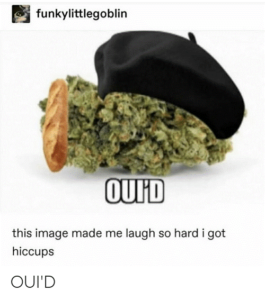 The origin of the slang word ‘Oui’d’ comes from Canada. Canada has a thriving cannabis culture, producing some of the most revered strains in the world, such as ‘B.C God Bud.’ It’s renowned for high-quality cannabis products, and many Canadians use cannabis recreationally or for medical reasons.

Since Canada is a French-speaking nation in the eastern provinces, the French influence on cannabis culture in the region likely led to the development of the term ‘oui’d’ as a replacement for ‘weed.’ However, no official evidence proves this is the term’s origin.

The first entry of ‘oui’d’ into the Urban Dictionary was on April 16, 2017. It’s still a relevant term for describing cannabis products in Canada, the United States, and Europe.

Some people may not understand that ‘oui’d’ references’ weed’ or cannabis products. That’s the primary purpose of the word – to distract people from what they’re talking about. It’s part of cannabis culture, and it is incorrect to describe anything other than marijuana products.

You can use the expression ‘oui’d’ when referencing cannabis. The phrase is a colloquialism for the dried buds of the plant that consumers smoke to feel ‘high.’ Cannabis is available in various strains and products like extracts, flowers, and edibles. ‘Oui’d’ is a blanket term for all cannabis products in all categories.

However, most people use it when referencing the plant’s flowers or ‘buds.’ The phrase suits social interactions, and you can use it in text or face-to-face conversations or when chatting with other cannabis enthusiasts in chatrooms online. Some people in cannabis culture consider the use of ‘oui’d’ to be pretentious and irritating.