Is a Rasta smoking a joint around you? You could ask them for a hit of their spliff if you want to get high. This post unpacks the meaning and origin of this term.

A spliff can refer to any joint rolled with paper. Usually, it’s a sizeable cigarette shared between people. If you ‘hit a spliff,’ it means that you take a drag on the joint. Spliffs can contain any grade of cannabis, from ‘dirt weed’ to ‘indoor’ or ‘Cali’ weed.

“Hey Mat, billa spliff man. We need to get through this day, and I need my head right this early in the morning. Get up.”

“Shut up, Joe. I’m trying to sleep. Build your spliff yourself and leave me alone. The bud is in the drawer downstairs, but leave me some.”

“That dude dipped that spliff in something because he’s starting to act mental. Let’s get out of here before he starts messing with us.”

“You got a spliff with you? It would be way cooler if you did. But if you don’t, that’s no problem. We’ll just pick up some at the dispensary.”

“I quit smoking spliffs years ago. That’s for kids. It’s time to grow up and face your problems, not run away from them.”

“I can’t get through a day without smoking a spliff. It’s how I calm myself and remain focused. Although my doctor says I’m self-medicating, and it could be dangerous for my mental health.” 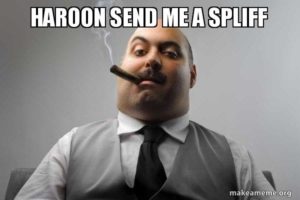 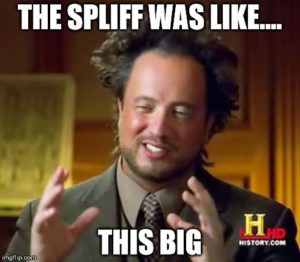 The term ‘spliff’ originates from the island nation of Jamaica and the Rastafarian community. ‘Rastas’ view cannabis as a religious sacrament and they smoke it regularly to achieve a state of consciousness they believe brings them closer to God.

The word spread through the UK, particularly among the Anglo-African youth, due to the influx of Jamaicans entering the United Kingdom. The term was adopted by white youth across the country, and it’s the most popular reference to a joint in the UK.

The term jumped from England into Europe, becoming a popular reference to a cannabis joint. The word also spread across the United States, but it’s less popular than in the UK and Europe.

Phrases Opposite to Spliff

You can use the term ‘spliff’ to describe a cannabis ‘joint’ or cigarette. It’s a common term used worldwide to define a joint and is well-understood by all age groups partaking in the drug. You can use ‘spliff’ in social situations to describe a joint.

While the term has Jamaican roots, you don’t have to be Jamaican to use the expression. Spliff is a common word used to replace ‘joint’ in the UK, especially with Anglo-African youth in West and North London. ‘Spliffs’ vary in size and shape, with some cannabis users rolling different shaped joints, such as the ‘crossbar’ or the ‘tulip.’