Are you looking at a man that can’t bring himself to take a risk? You could call him a ‘pansy’ to describe his cowardice.

The expression ‘pansy’ means someone that displays cowardice or a lack of will in a stressful situation or when challenged by others. If you’re a pansy, you lack conviction and shy away from challenges or demanding situations that require you to take a risk.

“Oh c’mon, Mike, don’t be such a pansy. It’s not like you’re going to die or anything. Bungee jumping is perfectly safe.”

“Let’s stop with the pansy talk, okay? Everyone needs to get their heads together so we can find our way out of this mess. Now is not the time for cowardice.”

“I can’t believe you’re acting like such a pansy. What do you mean you won’t get in the ocean because you’re afraid of a shark attack. You have a better chance of dying in a car wreck on the way home.”

“Stop being a pansy. I would never have invited you to this function if I had known you were this much of a wuss.”

“This job isn’t for pansies. It requires someone with a strong will and the intestinal fortitude to handle the stress and demands of the job.”

“My brother’s kid is such a pansy. They never bothered to let him figure out things on his own, and now he’s just a mommy’s boy that relies on her for everything; it’s pathetic.”

“Stop being such a pansy and pick up the tool; it’s not going to bite you. If you want to fix your car, you’ll need to learn how to use it.” 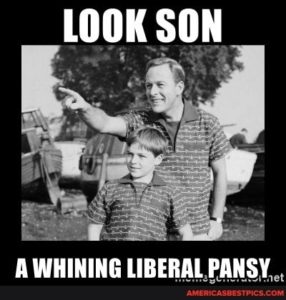 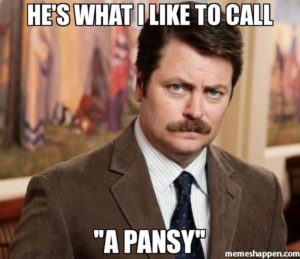 The expression ‘pansy’ originates from the French word ‘pensée.’ Pensée in French is the past participle of ‘to think,’ but is also a feminine reflexive. The term first appeared in the 15th century,  with the original meaning being a man who overthinks a situation, failing to take action because of fear.

The original phrase meant a man who thinks like a woman or doesn’t like to take risks in life. In the 15th century, blue-collar workers and slaves had stocky, muscular builds due to their work. However, thinking men, such as academics, was thin and scrawny with no muscle tone due to a lack of activity.

As a result, working-class men labeled these individuals ‘pansies’ as they were not considered ‘men’ by the working class. In 1929, the term ‘pansy’ changed to a man exhibiting effeminate or homosexual behavior.

However, the modern use of the phrase refers to someone unwilling to take a risk due to being paralyzed by fear.

Phrases Opposite to Pansy

The phrase ‘pansy’ doesn’t refer to flowers. It’s a term used to describe someone with a weak will and no courage. It’s important to note that the expression only applies to men and boys, and using it to describe women is incorrect.

You can use the term ‘pansy’ when describing a man with no courage or leadership ability. The ‘pansy’ exhibits submissive behavior and wilt in a confrontation. The expression suits social use. Use it with your friends when one of them shows cowardice at doing something dangerous or someone’s negative attitude to taking a risk.

‘Pansy’ refers to someone that has no ‘backbone’ or no ability to take command of a situation. They feel inferior to ‘alpha’ types that exert dominance in their lives. You can use pansy to describe men or boys and their feminine attitude or appearance. The phrase doesn’t suit professional use, although you could say a salesperson that’s afraid to talk to customers is a pansy due to their behavior.