Are you watching the Netflix series  ‘The Outer Banks?’ Do you know the difference between a ‘pogue’ and a ‘kook?’ This post unpacks everything you need to know about these expressions.

The expression ‘pogue’ refers to a person from the poor side of town. They live in a low-income household and are the sworn enemy of the ‘kooks.’

The pogues and kooks are characters in the Netflix series, ‘The Outer Banks.’ The pogues are the low-income community, and the kooks are the old-money wealthy community. The TV show shows the socio-economic differences between the two classes of people and how different life can be, even though they all live in the same area of the Outer Banks.

The series refers to a real-life situation in the area, and it’s the same story for many communities across the United States.

While the more widespread use of pogue describes a low-income character in the Netflix series, it also represents military members who don’t engage in combat or those not on the front lines of a military engagement with the enemy.

“Look at these pogues coming down to the beach to try and snag our barrels. Don’t they know the kooks own this spot? The lighthouse has been ours for years.”

“Look, you pogue, I don’t know who told you that it was cool to surf here, but this spot is exclusively for the kooks. We’re not going to let you guys get in the water; I’m sorry.”

“Why do people always have to classify people due to their socioeconomic status. Pogues and kooks are a good example of how it divided the Outer Banks community.”

“I guess the pogues vs. kooks war will last on the Outer Banks forever. There’s no changing that situation and how people feel.”

“It’s on people. Pogues versus kooks, and may the best team win. we all know who that will be, don’t we?” 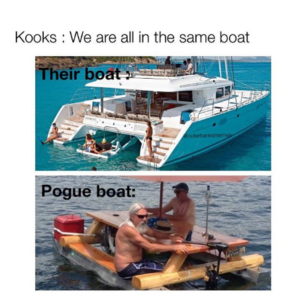 The expression ‘pogue’ originates from the North Carolina beach town ‘the Outer Banks.’ It’s part of the community’s lingo to describe people with affluence and those with a lower ranking on the socio-economic scale.

The term became popular on social media after the release of the Netflix series ‘The Outer Banks,’ describing life on the OBX and the difference between ‘pogues’ and ‘kooks’ in the community. The TV series first aired in April 2020 and is expected to run for several seasons on the streaming platform.

Phrases Opposite to Pogue

Some people may assume that the expression ‘pogues’ refers to the ‘pug’ dog. They may also confuse the meanings of ‘pogues’ and ‘kooks.’

Some people may incorrectly attribute the invention of the saying to the TV show ‘The Outer banks.’ However, it’s a common reference in many coastal communities across the United States.

You can use the expression ‘pogue’ when referring to someone from the ‘wrong side of the tracks’ or the poor part of town. It originates from the OBX TV series but applies to many real-world communities across the United States. You can use ‘pogues’ when you want to express the opposite of ‘kook.’

The word ‘pogues’ comes from a TV series, but it’s a real-life word that has a history of use in the Carolinas, specifically in the Outer Banks. However, you can use it to describe anyone from the rough side of town in any community or country around the globe.