Did your manager tell you it’s time to ‘push the envelope’ with your sales performance this month? This post unpacks the meaning and origin of this expression.

The expression ‘push the envelope’ means to test and surpass the limits of your physical or mental performance. Typically, it refers to placing yourself in a risky position to achieve greatness or break a record.

The aeronautical use of the expression means that you can’t safely exceed the performance limits of a task. The phrase originally referred to space flight and aeronautics but later moved into the mainstream to describe any risk-taking activity.

If you ‘push the envelope,’ it means you’re going beyond what was thought possible and entering unknown territory. It means you’re pushing the limits of what’s possible in a quest to attain glory.

“We’re going to push the envelope with this performance, team. This month needs a new sales record, or we’ll be behind on the annual budget.”

“Let’s push the envelope and give it everything we’ve got. Keep breathing until you hear the cue to stop, then hold your breath for 15 seconds.”

“The pilots we’re pushing the envelope in the F18 Hornet used in the new Top Gun movie. It was amazing to watch those machines in the air.”

“The driver has to push the envelope to get back to the lead. His last pit stop slowed him down by 12 seconds.”

“If you’re not pushing the envelope, you’re not really trying. Every time you step into the gym, you have to have the best work out of your life.”

“We need to push the envelope with this project. The client demands nothing but the best, and we need to retain them as a client.”

“Kim is going to push the envelope with this performance. She has some new material to share with the crowd. Let’s see if they can handle it.” 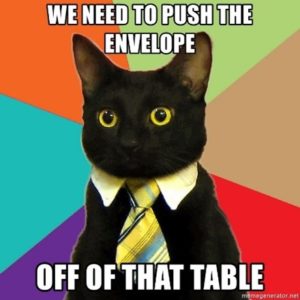 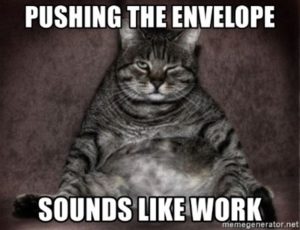 The expression ‘push the envelope’ originates from the aviation industry and space flight. While it was a niche term used by airmen and astronauts, it entered the mainstream culture in 1979 with the release of the award-winning nonfiction book ‘The Right Stuff,’ written by legendary American author Tom Wolfe.

The story follows Chuck Yaeger as he piloted the X-1A to set an airspeed record of Mach 2.42. However, the phrase appears in a slightly altered format, ‘push the outside of the envelope.’

The modern format of the phrase ‘push the envelope’ first appeared in Newsweek on November 23rd, 1981, as follows.

“At 400,000 feet, the shuttle was dropping fast above the Pacific. Since it had no maneuvering power, the spaceplane had to land right the first time. But even after the shortened flight, Columbia had enough bravado left to “push the envelope” one more time.”

Phrases Similar to Push the Envelope

Phrases Opposite to Push the Envelope

The phrase has nothing to do with pushing envelopes. In this case, the envelope is the limit of your capabilities, and ‘pushing’ means you’re trying to break through your performance limitations.

You can use the expression ‘push the envelope’ when you want to test your limits to the extreme. The phrase suits professional and social use. For instance, you could use it at work to motivate the sales team to give their best performance this quarter. You could use it at home to describe how your kids are pushing the envelope of your patience.

To ‘push the envelope’ is to give something everything you have, expending all your energy without conserving any. If you’re ‘pushing the envelope,’ you’re giving it everything you’ve got without holding back. The phrase suits verbal exchanges and text-based communications. Most people phrase the expression as a challenge.