Are you scrolling through ‘rice purity score’ videos on TikTok? This post unpacks the meaning and origin of this expression.

The expression ‘rice purity score’ refers to a person’s level of innocence in the modern world. It’s a brief survey taken by university students. However, the more current meaning of the term is to describe a viral video trend on TikTok.

The Rice purity test is 100 questions assessing your level of purity or innocence. The survey asks about drug use, sex acts, alcohol use, and crime. After completing the test, the participant gets a rice purity score between 0 to 100.

“You can’t believe what anyone says in the rice purity test. Everyone lies to cover up their behavior. It’s just human nature to do so.”

“You can’t blame people for lying in the rice purity test. Their reputation is at stake, and people will lie to protect it.”

“These videos on the rice purity test are hilarious. I think I spent three hours scrolling through them on TikTok last night.”

“The rice purity test trend is fascinating to watch. I bet that most people are lying when they take the survey. They just font want to look bad on video.”

“I can’t blame people for lying on the rice purity test. Who lives like an angel anyway? Society has all these expectations of us we have to meet.”

“So what if I score low on the rice purity test? Does that make me a bad person?” 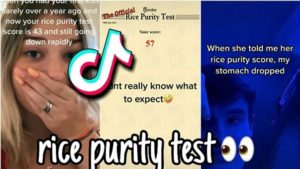 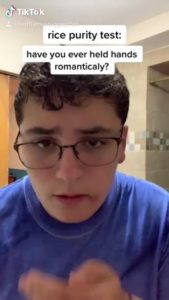 The rice purity test was an official survey given to students at Rice University in Houston, Texas. The university used the test to judge the moral character of its student body during the eighties.

While some might view this as an invasion of privacy, it’s important to note that many other universities were implementing similar programs around the time. Columbia and Carnegie Mellon were examples of schools implementing similar surveys in the 1980s. Online purity tests were some of the first internet memes in the late 1980s.

However, the modern origin of the term comes from the viral trend on TikTok. Users will take the rice purity test and react to their score.

Phrases Opposite to Rice Purity Score

While the rice purity test is an official survey, you’re not usually asking a person if you’ve if you search for them on TikTok.

take the survey. It references a viral video trend on TikTok where people take the test. Using the expression outside of the TikTok trend isn’t incorrect, but it’s not a common term and is understood by a niche few.

You can use the term ‘purity score’ to describe a person’s innocence concerning the modern world, culture, and society as a whole. If you ask someone their purity score, you’ll usually not know the person and be asking a genuine question. Or, you could be asking a friend you know did something naughty. The term suits social use in text communications and verbal exchanges.

The biggest use of the term is to describe the viral video trend on the social media platform TikTok. These videos feature a person taking the Rice purity test and answering the questions in the survey for comical purposes. There are thousands of rice purity test videos if you search for them on the platform.