Are you listening to a group of kids sing ‘ring around the rosie’ at nursery school? Do you know the meaning behind this nursery rhyme? This post unpacks the origin and meaning of this dark nursery rhyme.

The expression ‘ring around the rosie’ comes from an English nursery rhyme appearing after the bubonic plague in London in the 1600s.

Ring around the Rosie describes the rash around the sore of a person infected with the plague. Pocket full of posies were flower petals plague doctors showered on their patients, helping ward off the smell of death.

Ashes meant the cremated remains of the deceased. We all fall down refers to death.

“Ring around the rose, a pocket full of posies. Ashes, ashes, we all fall down! I remember that rhyme from nursery school. It’s surprising how you don’t hear it as much as an adult.”

“Ring around the rosie was a nursery rhyme talking about the impact of the black plague in England. However, some historians think it predates the spread of the black death.”

“Do you remember that nursery rhyme, ring around the rosie, that we sand as kids? Well, it has a pretty dark story behind it.”

“Ring around the rosie was one of my favorite nursery rhymes as a little girl. I remember how we used to all love falling down at the end of the song.”

“I love how people think ring around the rosie is a carefree kids nursery rhyme. Actually, it describes the black death and the plague that spread throughout England.”

“There were so many victims of the black death in England. That song, ring around the rosies, commemorates the people who died in that dreaded pandemic.” 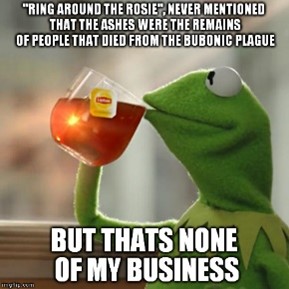 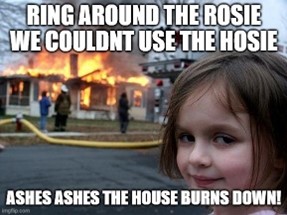 Some language experts suggest the rhyme arose from ‘The Great Plague,’ an outbreak of bubonic and pneumonic plague affecting the UK in 1665.

“Ring-a-Ring-a-Roses is all about the Great Plague; the apparent whimsy being a foil for one of London’s most atavistic dreads (thanks to the Black Death).”

The fatalism involved with the rhyme is quite dramatic when you understand its meaning. The roses are a euphemism for the deadly rash caused by bacterial infection. The posies wear a so-called hoke remedy to prevent the plague from infecting you, and the ‘a-tishoos’ is the sneezing symptoms caused by the disease.

When we ‘all fall down at the end of the rhyme, it means you die.

Phrases Similar to Ring Around the Rosie

Phrases Opposite to Ring Around the Rosie

Ways People May Say Ring Around the Rosie Incorrectly

Some people may use the phrase ‘ring around the rosie’ as a way to talk about flowers or the springtime. However, it’s not the case. The children’s nursery rhyme has a dark background t it, with the ‘rosie’ referring to one of the signs and symptoms of the disease called ‘The Black Plague.”

Acceptable Ways to Phrase Ring Around the Rosie

The only time you hear ‘ring around the rosie’ is in a nursery school. It’s still a common rhyme taught to children, especially in the UK. Teachers don’t use the rhyme as a homage to the people that died in the plague, and many children will never learn the meaning behind the song until they reach adulthood. Many Brits that sang the song as a child might not even know the history behind it at all.