Are you wrestling with your sibling? If they want you to submit, they’ll ask you to say ‘uncle.’ This post unpacks the meaning and origin of this expression.

The expression ‘say uncle’ acts as a way to tell the other person involved in an action, conversation, or task to submit to your authority. It’s more common to hear it used in physical engagements, such as two siblings wrestling for authority. You’ll use ‘say uncle’ in serious or lighthearted situations between friends, family, or colleagues.

If two brothers are wrestling, the sibling with the advantage will ask their brother to say ‘uncle.’ The other brother would say the word ‘uncle’ to submit to the physical authority of the other. The phrase applies to physical and non-physical engagements.

“Listen, bro, say uncle, and this stops. I’m not going to release the choke until you give up, and there’s no way you’re getting out of this lock.”

“All you have to do is ‘say uncle’ to make this stop. Go on, give up. Or you can keep it going, and you’ll never get what you want from me. It’s your choice.”

“I was battling with Matty on the mats this afternoon. He got me in a rear naked choke, and I struggled to get out. He made me say ‘uncle.’ It was so embarrassing.”

“It looks like Europe will have to ‘say uncle’ to Putin if they want to stop the deflationary collapse of the Euro and the end of the Eurozone this winter.”

“I was playing around with my son this afternoon, and he got me in a headlock. I had to say uncle to get him to let go, it was so funny, and everyone laughed.”

“All you have to do to make this stops is say ‘uncle.’ Or, we can keep going, and we’ll see how long you last before I choke you out.” 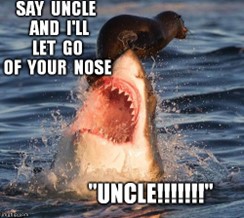 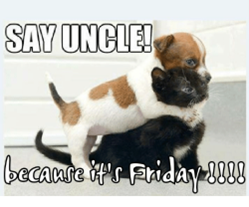 The expression ‘say uncle’ has several origin stories. Some experts believe it comes from the Irish immigration to New England and Canada in the 19th century and the anglicization of the Irish word ‘anacal’, meaning quarter or deliverance.

Some language experts believe it originates from the Roman empire, where young boys would say ‘patrue mi patruissime’ (uncle, my best of uncles) when they got into trouble.

Some people suggest the phrase comes from a joke in the 19th century. The owner of a parrot would teach the bird to address his uncle.

The most probable origin of the saying comes from a derivative of the American-English term ‘Time Out.’ Saying ‘time out’ is a plea to end hostile action. The abbreviation ‘TO’ is similar to the Spanish word ‘Tio,’ meaning ‘uncle.’

Phrases Opposite to Say Uncle

The phrase ‘say uncle’ is a statement of submission. Using it to describe someone’s uncle or to get recognition from your nephew or niece is incorrect. The ‘uncle’ in the phrase is a term of submission. When the other person says ‘uncle,’ you stop the action causing them stress.

You can use the expression ‘say uncle’ to enforce submission on someone else. The phrase can have a serious or light-hearted tone, depending on the context of the situation. For instance, you could be fighting with your brother and ask them to ‘say uncle’ when you have them in a headlock.

Or you could tell a colleague at work to ‘say uncle’ to admit defeat in your monthly sales challenge. If they decide to yield to you, you’ll give them some of your leads. Typically, the saying suits friendly situations, and you’re not hurting anyone with your actions. After using ‘say uncle,’ it’s up to the other person to say ‘uncle’ to acknowledge their submission.