Are you looking for a way to challenge someone to a fight in Canada? You could use “skoden” as a way to entice them into taking a swing at you. This post unpacks the meaning and origin of this expression.

The expression “skoden” is a slang word meaning “let’s go then.” It’s a way of challenging someone to a fight. Typically, people will use it as a way to tell people that they have had enough of their behavior, and they are ready to fight them to show them where they belong in the social hierarchy.

In local native American and Canadian communities, people will reply with “stoodis” if they accept the challenge and want to fight the other person. “Stoodis” translates to “let’s do this.” If the person thinks you are bluffing, they may accept your challenge to fight, and you will have to fight them or lose face with the community.

“Oh, you think you’re a tough guy, and you have a reputation around here. Okay big man, skoden, whatta ya think?”

“Oh, shut your mouth. If you want to see who’s the bigger man, skoden. What do you want to do? Let’s go outside and see who’s right or end it right now.”

“What’s the point of trying to throw insults at you when I can just beat you to an inch of your life. You want to keep talking, fine. You want to throw hands, skoden.”

“Okay, hero, I’ve had enough of your big mouth and hands all over our women. It’s time for you to leave. If you have a problem with that, skoden.”

“Are you sure you want to do that around here? Don’t you know all my friends are as crazy as I am? You want to start something, skoden.”

“Let’s see what happens when you’re deep in the thick of it, and the blood is running from your forehead into your eyes. If you think you’re man enough to handle it, skoden.”

“Okay, If you think you’re the enforcer, throw down your stick, and let’s ey? Whattaya waiting for big man, skoden yeah?” 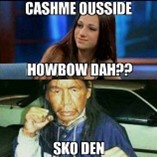 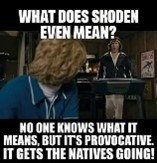 The expression “skoden” originates from indigenous communities in the United States and Canada. It’s a way of challenging someone to a fight, showing them that you aren’t afraid of their aggression or hostility towards you.

“Skoden” became a shortening of “let’s go then,” with the dialect of the local languages leading to a change in the pronunciation of the words. This rez slang made its way into urban communities over the years, and it’s a common saying in hockey leagues when players want to fight.

Skoden reached meme status on social media platforms in 2013. The memes show an old local man in a fighting posture, with “skoden” as the caption.

Some people may think that “skoden” is a place or destination. It’s also common for people to believe it has an origin in memes and online gaming.

However, this British saying is for challenging people to a fight. However, due to the word’s slang meaning and heavy dialect, most people outside the UK and Australia won’t know what it means.

You can use the phrase “skoden” when asking someone to make the first move against you in a fight. You’re asking them to throw the first punch or accept your challenge. You won’t be the one responsible for throwing the first punch, and you’re giving the person a warning that you’re ready to fight.

It’s also a common way to bluff people into thinking that you often do this and might be a good fighter. So, they will back down at your threatening posture. However, if you are using it as a bluff, if someone tells you “Stoodis,” you might be in trouble.