Are you looking for a way to tell someone to knock off their behavior? Maybe you want to tell them that they are through with their service to your company? Or maybe you just want to take some food off the grill? If so, you could use “stick a fork in it” in any of these situations. This post unpacks the meaning and origin of this expression.

The expression “stick a fork in it” can refer to get someone to stop what they’re doing or it can mean that you’re finished with a task.

It’s a common saying meaning that something or someone is finished. It can also refer to people that are exhausted or injured and unable to continue with what they were doing.

“Jeepers, Larry, stick a fork in it already. We’re done with hearing your old war stories. Let’s just sit here and talk about something else, okay?”

“Okay, kids, stick a fork in it. That’s enough playtime for one evening. Get upstairs and brush your teeth. It’s almost bedtime.”

“Okay, stick a fork in it. That’s enough. There’s no need to have band practice at 10pm at night. The neighbors are calling asking why they live next to a music club.”

“Let’s stick a fork in it. I think we’ve come as far as we can with the project for now. Let’s get the approval of this stage and then move onto the next section.”

“I think it’s time to stick a fork in it. Those sausages look done, and they’re about to burst at the seams. Let’s get them off the grill and eat.” 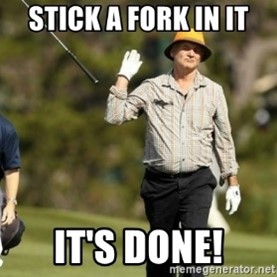 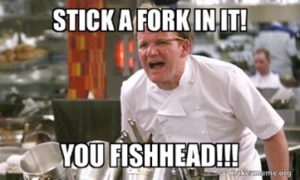 The expression “stick a fork in it” comes from the practice of cooking. People have been sticking forks in meat to check if it’s ready for eating for centuries. By sticking a fork in it, you’re removing the food from the grill and preparing it for service.

However, the phrase actually originates from the world of professional baseball commentary. It’s a way of saying that a player spent all his energy or got injured and needs replacement.

The earliest use of the expression comes from the American baseball player and legendary commentator, Dizzy Dean. Dizzy coined the phrase in the 1940s during a game where the pitcher was clearly not on a good run and in need of replacement.

“You can stick a fork in him, folks—he’s done.”

Phrases Similar to Stick a Fork in It

Ways People May Say Stick a Fork in It Incorrectly

The phrase has nothing to do with sticking forks in anything. The “fork,” in this case, is the approval of completion. The “it” in the phrase is the project or task you’re working on. It’s more common for it to appear in conversations unrelated to food than those about food preparation or cooking.

Acceptable Ways to Phrase Stick a Fork in It

You can use the saying at home when telling your kids to be quiet or stop running around the house. It also suits use when you want to say you’ve reached the end or final outcome of a project.