Did someone just tell you to give your best effort at a task? If so, you could say to them that you intend to go “the whole nine yards” for them. This post unpacks the meaning and origin of this expression.

The “whole nine yards” means that you’re going to give something everything you have to ensure a positive outcome. The phrase can refer to your actions or the actions of others. For example, if you’re at work and a boss asks you to give the project the “whole nine yards,” they are asking you to do as good a job as possible, going beyond their expectations.

This colloquial phrase stems from an American-English term and means “the whole lot” or “all the way” when used as an adjective. You’ll hear the phrase often, and it’s even a title of a movie starring Hollywood A-lister Bruce Willis.

When describing something to someone, using “the whole nine yards” suggests that you’ll give the task your undivided attention, and they can trust you to deliver better-than-expected results.

“The boss asked me to go the whole nine yards with this project. It’s up to me to make it happen for the customer.”

“I want the complete package; give me the whole nine yards.”

“Kelly has so many pets; hamsters, dogs, cats, the whole nine yards.”

“My Tesla comes with every option. Climate control, self-driving, the whole nine yards.” 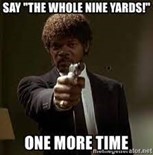 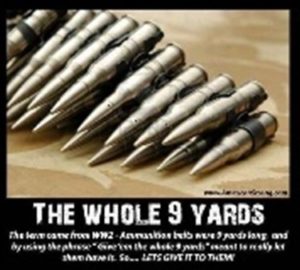 The origin of the phrase “the whole nine yards” comes from the 1892 satirical works of William Safire. Safire called the term “one of the great etymological mysteries of our time.” Originally, Safire thought the phrase referred to the cubic yard capacity of a cement truck’s payload.

However, other language experts believe the phrase originates from the maritime industry. Square-rigger ships featured a design with three masts, with three yards of rope supporting the sails. Therefore, “the whole nine yards” meant that all three sails were set.

Another possible origin story comes from World War II, referring to the length of ammunition belts on fighter planes. After emptying the ammo reserves, the pilot would say that he used “the whole nine yards” of ammunition at his disposal.

Some experts also think that the phrase refers to the length of the Queen of England’s bridal train or the “Shroud of Turin.”

Phrases Opposite to The Whole Nine Yards Meaning

Some people may use the phrase “the whole nine yards” to describe distance measurement. The term doesn’t have any reference to distance in language. It’s another way of saying “the whole shebang,” or telling people you will pull out all the stops to get them what they want.