Are you looking for a way to describe acting against someone like they did to you? You could use ‘tit for tat’ to characterize your reaction. This post unpacks the meaning and origin of this expression.

The expression ‘tit for tat’ means responding to someone’s action against you using the same force. Typically, it refers to a physical blow to a person, like punching them in the arm. You would punch them back with the same force in a tit-for-tat situation. If you hit them with more power than they hit you with, it’s not tit for tat.

While tit for tat originally referred to an act of violence against someone, now, it refers to any action and reaction. For instance, if you’re driving to work and someone cuts you off, then you cut them off in traffic later in the morning, that would be tit for tat.

The phrase applies to many situations. However, it describes where the action and reaction are of equal force and have an identical outcome.

“If you do that to Mike, he’ll just do the same to you. Tit for tat. Don’t bother causing a problem. Just sit down with him and talk it out like adults.”

“Is there any way we can come to an agreement? I’m sick of us playing tit for tat. We can keep dancing around this or make it happen. What do you want to do?”

“Kim and Shayla just can’t agree with each other their always arguing tit for tat, and I don’t know why they’re friends.” 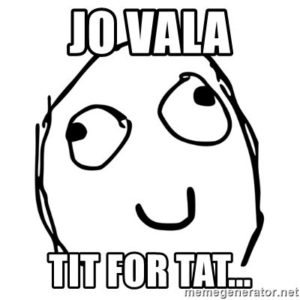 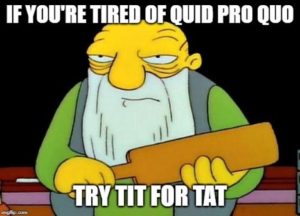 The expression ‘tit for tat’ originates from the author, John Heywood, in his book, ‘The Spider and the Flie,’ published in 1556, where it appears as follows.

“That is tit for tat in this altricacion (altercation).”

The first use of the phrase in modern language comes from the slang lexicographer ‘Eric Partridge’ his work, ‘Songs & Slang of the British Soldier,’ published in 1930, where it appears as follows.

The British Cockney rhyming slang ‘titfer’ is the same reference. This term was popularized by English comedian Tommy Trinder.

Phrases Similar to Tit for Tat

Phrases Opposite to Tit for Tat

You can use the phrase “tit for tat’ to describe a reaction to another person’s transgression against you. The term suits social and personal use. Use it at work to describe stealing leads from a teammate after they did the same to you last week. Use it at home to explain the reason for grounding your kids after they misbehave.

‘Tit for tat’ is similar to ‘you give what you get.’ It’s a way of describing a reaction equal to the transgression committed against you. For instance, if your friend punches you in the arm as a joke, you do the same to him with the same force.